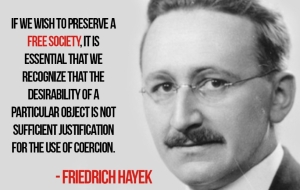 I have long held the belief that a reasonably educated person — regardless of his professional specialization or occupation — should be familiar with the basic principles of the natural sciences (physics, biology, etc.), the social sciences (psychology, economics, etc.), know how to do arithmetic, know something about law and history, philosophy, etc.

I confess that I was not “reasonably” educated when I graduated from engineering school. Other than what I was minimally required to learn — the basics of science, engineering and math — I knew hardly anything else. Today I would judge my 20-something year old self as a barely educated, mostly ignorant person. Fortunately for me, I am naturally thoughtful, curious and quite intelligent, which allowed me to overcome some of my deficiencies. I was doubly fortunate in being able to learn economics — first neoclassical and eventually Austrian. Now I consider myself a reasonably educated person. And getting more educated by the day.

These musings were prompted by two recent pieces by Don Boudreaux. He is formally trained in law and in economics. Most economists don’t know much about law (that’s me), and most lawyers don’t know economics (every lawyer I know.) One cannot refer to “law and economics” without reference to Ronald Coase. (See Ronald Coase – Law and Economics.)

I liked Don’s articles. The first, from March 18th, is Stop the Cartoonish Excuses for Covid Restrictions:

In Anglo-American law, a person is entitled to compensation only if he or she transferred title to valuable property with no intention of giving a gift, or suffered the loss of some property interest as a result of the actions of someone who violated his or her property rights. Therefore, the mere fact that Sarah’s action improves Silas’s well-being is insufficient to create an obligation that someone pay Sarah for her ‘positive’ action. Likewise, the mere fact that Silas suffers some harm from Steve’s construction activities is insufficient to justify imposing a tax on Steve for his noisy construction activities.

The law refuses to impose obligations in circumstances such as these because the law recognizes a feature of reality to which economists are often blind. While both economics and law understand that people, being gregarious creatures, are forever having impacts on strangers, the law – unlike the all-too-common careless economist – recognizes that people often repeatedly interact with each other through time in ways that cause the costs and benefits of “external” effects to tend to balance out for each person.

The second is a follow-up published today, The Mischief of “Pecuniary Externalities.” He elucidates the subtle point through an example anyone can follow with ease.

Because Silas (it is reasonable to assume) wants the right to sell his car whenever he chooses and at whatever price he can fetch, he cannot legitimately assert ethical or legal standing to prevent Sarah from exercising the same right over her car. By giving this right to all persons, the law effectively recognizes that everyone under its jurisdiction agrees that all people have a right to sell their cars even if some car-selling actions harm some people at particular points in time by causing the market values of their cars to fall.

I recommend those two pieces. They help in our understanding the case for free trade.