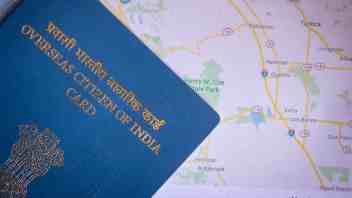 Here’s a concrete example of something trivial that, in the light of general principles, explains why governments of some countries are quite terrible in governing. This is a follow-up of  the previous post, First Principle Explain a Lot.

Around 1.2% — 3.8 million — of the US population are of Indian ancestry. I am one of them. I estimate that around 1 million of us are US citizens and therefore need a visa to visit India. I also estimate that at least half of us (around 500,000) so-called “Non Resident Indians” visit India every year. The point to keep in mind is that the number is in the hundreds of thousands.

The Government of India recognizes some of the Indian diaspora as “Overseas citizens of India.” It’s idiotic to do so because the Indian government does not allow dual citizenship, and therefore it contradicts itself. But I will pass on that matter for now. Idiotic, illogical, and contradictory rules and regulations are par for the course when it comes to the Indian government. END_OF_DOCUMENT_TOKEN_TO_BE_REPLACED

Examining very closely even something quite trivial in the light of general principles helps in understanding the world. It’s a way for us ordinary humans to explain, and to understand what is and why it is so.

For extraordinary humans — say a Newton or an Einstein — close observation of something trivial coupled with clarity of thought lead them to explain not only the phenomenon at hand but the discovery of general principles that explain the non-trivial and the unobserved.

Newton examined the fall of an apple, so the story goes, and figured out that the reason it did so was the same that explains the orbits of astronomical bodies. Now that I know the laws of motion and gravitation, I too can understand to some limited extent natural phenomena using those principles which I could not have discovered. END_OF_DOCUMENT_TOKEN_TO_BE_REPLACED