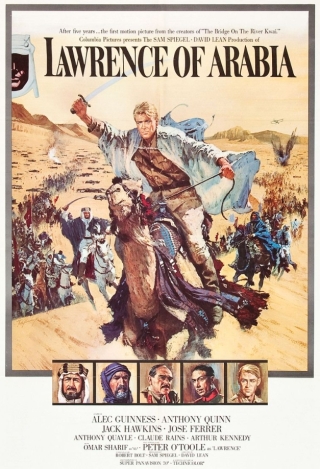 The 1962 movie “Lawrence of Arabia” by David Lean is an all-time favorite. Peter O’Toole is superb as T. E. Lawrence and the cinematography is epic. It’s one of those movies that appears on practically all “Top 100 Movies” list.

The wiki notes (click on the image on the left):

“The American Film Institute ranked Lawrence of Arabia 5th in its original and 7th in its updated 100 Years…100 Movies lists and first in its list of the greatest American films of the “epic” genre. In 1991, the film was … selected for preservation in the United States National Film Registry. In 1999, the film placed third in the British Film Institute’s poll of the best British films of the 20th century, and in 2001 the magazine Total Film called it “as shockingly beautiful and hugely intelligent as any film ever made” and “faultless”.” END_OF_DOCUMENT_TOKEN_TO_BE_REPLACED