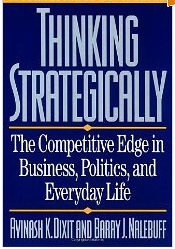 It’s funny how India produces world-class economists but is an impoverished third-world country with an economy that languishes at the bottom of the barrel. Not ha-ha funny but ironically funny. Still, as Indians we can hold up our heads with pride that in our tribe we have economists such as Bhagwati, Srinivasan, Dasgupta, Bardhan, Basu — and of course Dixit.

I recall with special fondness my sole meeting with Prof Avinash Dixit. It was in 1996. I was in my first year of my graduate studies in economics, almost totally ignorant of economics. One day, Brain Wright who was teaching us welfare economics said that we will not be having a class. Reason? Avinash Dixit was giving a lecture at the business school and we could not afford to miss that. I had no idea who Dixit was but we all went over to listen to the man. I often thank Brian for the opportunity.

So off we went. The lecture hall was packed to the brim. Prof Dixit’s lecture went over my head. He was talking about agency theory. I did not have the vocabulary to fully understand what he was talking about but still I got quite a bit of it because he is a great teacher. It has to do with principals and agents, etc. What I found delightful was his heavy Marathi accent. Later I went up to him and introduced myself saying that I too was from Maharashtra.

I have been recommending “Thinking Strategically” which Dixit co-authored for all who care to understand game theory and its applications for years now.

Recently, the Finance&Development site of the International Monetary Fund carried a profile of Avinash Dixit. (Thanks to Rajan Parrikar for the link.) I loved reading it.

It’s interesting that the article records that Dixit was drawn to game theory after reading Thomas Schellings The Strategy of Conflict. I was drawn to economics after reading that book. Later I read Micromotives and Macrobehavior by Schelling. You must read it.

Anyway, Prof Dixit has a great mind. Check out the profile. Here are a few excerpt, for the record.

Teaching game theory, he insists, must be fun—he has won awards for his teaching prowess—and he tries to illustrate key concepts with tales from films, books, and real life.

Dani Rodrik, professor of international political economy at Harvard, says Dixit was the best classroom teacher he ever had—he never treated anything as silly or obvious. “No matter how stupid a question seemed, he would stop, raise his hand to his chin, narrow his eyes, and think a long time about it, while the rest of us in the classroom would roll our eyes at the stupidity of the questioner,” said Rodrik. “Then he would say, “Ah, I see what you have in mind . . . ,” and he would roll out an answer to a deep and interesting question the student had no idea he had asked.”
“What makes him special,” says former student Kala Krishna, now an economics professor at Penn State, “is that more than anyone else I know, he sees economics as an inescapable part of life: from books, movies, negotiating with a taxi driver—everything has economic content. He truly loves economics, and you can see how much he is enjoying himself doing it.”

Others praise his wit. “Avinash Dixit is one of my favorite economists, in part because he has a trait that is extremely rare among economists: a good sense of humor,” said Steven D. Levitt, coauthor of the best-selling book Freakonomics.

He is also famous for his textbook on trade with Norwegian economist Victor Norman, The Theory of International Trade, which was enormously influential, and his work on oligopoly and industrial organization.

What became known as the “Dixit-Stiglitz” model underpins a huge body of economic theory on international trade, economic growth, and economic geography—a model tapped by Paul Krugman, who won the Nobel Prize in 2008.

The model, first published in 1977, became a building block for others in the new fields of endogenous growth theory and regional and urban economics—what journalist David Warsh described as “one of those economical and easy-to-use ‘Volkswagen’ models that were the hallmark of MIT” (Warsh, 2006).

Monopolistic competition was pioneered by Joan Robinson and Edward Chamberlin in the 1930s and was the stuff of basic economics for years. But Stiglitz—who went on to win a Nobel Prize in 2001 for his work with Michael Spence and George Akerlof on the analysis of markets with asymmetric information—and Dixit took it to a new level.

“However, where the earlier attempts failed, the Dixit-Stiglitz approach turned out to be very successful and has the potential for ‘classic status.’”
Huge impact

The theory of monopolistic competition shook up modern trade theory, which Oxford economist Peter Neary attributed to “one factor above all others”: the development of the “elegant and parsimonious” model by Dixit and Stiglitz.

Dixit has spent the past decade watching what drives economic development, including governance and institutions, and has studied fragile states—poor countries recovering from conflict or disasters. “Governance was neglected by economists for a long time, perhaps because they expected the government to provide it efficiently. However, experience with less developed and reforming economies, and observations from economic history, have led economists to study non-governmental institutions of governance,” he says (Dixit, 2008).

To this he brings his habitual skepticism.

While Dixit acknowledges the importance of democracy, property rights, contract enforcement, and the provision of public infrastructure and services that support private economic activity, he is scathing about attempts to draw up a menu of items that underpin development in low-income countries.

“There’s a long, long tradition of people offering recipes which don’t work out,” he says. He stirred things up with a lecture at the World Bank in 2005 that he said he hoped would be provocative and critical, but “evenhandedly so.”

In many cases, he argued in that lecture, the accumulated research on the role of institutions in development stopped short of giving useful or reliable policy prescriptions. “I hope to give everyone some incentives to think further and harder.”

In a subsequent talk at the Reserve Bank of India (Dixit, 2007), he said that in general “bottom-up and organically generated reforms will work better than imposed top-down ones.”

The World Bank’s Philip Keefer, who was Dixit’s respondent at the 2005 lecture, said the Princeton professor was right to be skeptical, but “big ideas” could help guide a country’s reform agenda.

To work effectively, Dixit said, change must be coordinated and take place across several fronts. “The one recipe that works is what I call ‘strategic complementarities.’ That is, if 15 things need to be done, doing 3 of them is not going to get you 20 percent of the way there. It’s going to get you much less. You’ll need to get all 15, or at least 13 or 12, right before you start to see any big effect. So that’s one thing, strategic complementarities, and the second is luck.

“Napoleon supposedly said that the quality he most admired in his generals was luck, and the same goes for governments and countries.”

Go read it all.

Post script: When Rajan sent me that link to the IMF article, he wrote

“You won’t find the name in an India Abroad “Indians of the Year” list, or in the bozo chain emails Indians slosh around. He is ‘unknown’ except to those in the know. And unlike that imposter Amartya Sen, this is the real deal. Ladies & Gentlemen, Professor Dixit -“