The primary advantage of not having to shave your mug is that you don’t have to face yourself in the mirror every day. Unless of course if one is totally shameless or is already barefaced (as in a barefaced liar.) I am just saying.
END_OF_DOCUMENT_TOKEN_TO_BE_REPLACED

You know that you have arrived when you find that your writing has been banned in some place. Nihar, when he was traveling in Iran, found that some blog posts of mine are banned there. He sent me a screen capture which you will find below the fold. Now at least I hope you are impressed. Or will you be impressed only after the Indian government bans this blog?

PS: I don’t think it will be long before the government of India bans this blog. There are too many things here which are embarrassing for the Indian government. Recall that the government of India banned Salman Rushdie even before the mullahs in Iran got their act together. The Indian government is holier than the mullahs of fundamentalist Islam. After all, how else can India be a “secular” state if it cannot pander to Islamic fundamentalism, eh?
END_OF_DOCUMENT_TOKEN_TO_BE_REPLACED 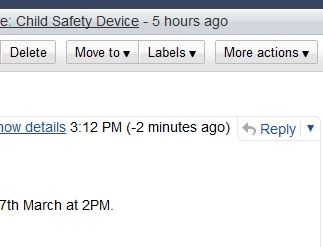 Google has to be the most technologically advanced company on earth, if not the whole universe. They have the capacity to bring you emails before they are sent.

Here’s the screen capture of an email that Google delivered to me about 2 minutes before it was sent. I had to wait for 2 minutes and then the counter said “0 minutes ago” — for the world to catch up with gmail.

I tell you, wonders will never cease as long as Google is around.

In a short article in SEED magazine, theoretical physicist and president of the Santa Fe Institute, Geoffrey West explains “why the future of humanity and the long-term sustainability of the planet are inextricably linked to the fate of our cities.”

A few excerpts below the fold. END_OF_DOCUMENT_TOKEN_TO_BE_REPLACED

Continuance of the UPA in power will jeopardize national security, according to Lt Gen S K Sinha, who retired as the Vice Chief of Army Staff. He is referred to as the “Scholar – Soldier”

An email received from Cdr P.P. Batra, describing the lecture by Lt.Gen(retd) SK Sinha, on 03 May 09, at the Constitution Club, New Delhi, is reproduced below the fold.
END_OF_DOCUMENT_TOKEN_TO_BE_REPLACED

An excerpt from today’s mail from Keith Hudson, a respected friend who lives in Bath, England. “Ideas in one’s head are slippery, slidery things and it’s not until one acts on them — in the form of changed behaviours or the production of tangible items — that their validity can be fully tested in the real world. Writing about them is only a halfway stage. However, the words one uses (and perhaps the new terms one invents) are rather like seeds that plants produce. They can float away in the air to land and germinate in other minds. Or, if they don’t propagate in this way, ideas seem more like those seeds with hooks that remain passive until picked up by other individuals — such as those I frequently have to pick out from my dog’s fur after her morning walk.”
END_OF_DOCUMENT_TOKEN_TO_BE_REPLACED 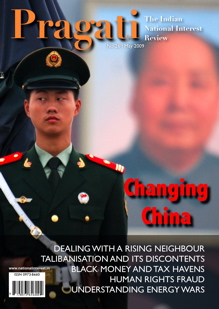 In an editorial piece for Pragati, Nitin Pai writes:

At a time when China seeks to play in the same league as the superpower of the day, it is to be expected that it will try to extract advantageous positions in the Indian Ocean region at India’s expense. The big scandal is not that China is securing bases in India’s neighbourhood by shoring up nasty regimes and abetting their outrageous policies; but rather, India does not even show any sign of doing what is necessary to protect its interests.