Gradually I have to come to sense that this is not the kind of simplicity that the future holds.  For despite its ancient character, the simplicity of the village is still in its “infancy”.

Occasionally people show me their new babies and ask me if that peaceful innocence is not just like that of the Buddha.  Probably not, I tell them, for within that baby reside all the latent seeds of worldly desire, just waiting to sprout as the opportunity arises.  On the other hand, the expression on the face of the Buddha, who had seen through the impermanence and suffering associated with such desires, reflects the invulnerability of true freedom. END_OF_DOCUMENT_TOKEN_TO_BE_REPLACED

The economy is a complex set of interlocking activities undertaken by an arbitrarily large collection of individuals and collectives attempting to achieve their self-selected ends as best as they can given the limited means at their disposal and their imperfect understanding of how to realize those ends. END_OF_DOCUMENT_TOKEN_TO_BE_REPLACED

“Among the calamities of war may be jointly numbered the diminution of the love of truth, by the falsehoods which interest dictates and credulity encourages.” That’s a truth that Samuel Johnson (1709 – 1784) — the great English poet, playwright, essayist, moralist, critic, biographer, editor and lexicographer — appears to have articulated long ago.

The vested interests of the few and the credulity of the masses conspire to kill whatever is the relevant truth. The war against the Chinese Covid-19 virus is no exception. The fake and the false have reigned with little opposition. Unsurprisingly, it’s the masses’ inability to reason and ignorance that is to blame for this misfortune. That sounds elitist but it is an unavoidable conclusion. END_OF_DOCUMENT_TOKEN_TO_BE_REPLACED

Greetings from the Charlotte Douglas International Airport (CLT). I am on a long layover on my way to Austin TX. My American Airline flight was from Philadelphia to Charlotte NC. And now I am waiting at CLT for my next flight.

According to the airport’s website, “CLT is ranked among the top 10 busiest airports in the world, averaging 1,600 daily aircraft operations. It serves approximately 178 nonstop destinations around the globe and welcomes more than 50 million passengers annually.”

As it happens, this is my first time in NC after several decades. Long time ago, I once drove through NC on my way from NJ to FL. It was during a very fierce snowstorm.

I will get to Austin TX late — actually past midnight my time but still before midnight TX time. Will write tomorrow.

UPDATE: CLT has been shut down for now due to a massive lightening storm. It is thundering like crazy. I am afraid that my flight will be late. I captured a bit of video that I will post when I get to Austin.

The world has had to deal with the Wuhan virus of 2019 (aka Covid-19) for over a year and a half. Diverse policies have been tried to deal with it by various public and private entities. Of the lot, the worst is clearly the mandatory lockdowns — with varying degrees of severity — that most governments imposed on their populations.

Lockdowns are a terrible idea. Imposing them adds to the damage that the virus causes, directly and indirectly, and makes a pretty bad situation significantly worse.

There are two basic reasons for why lockdowns are bad. One is a moral/ethical argument, and the other is an economic argument. I believe the moral argument is sufficient by itself; the economic argument only strengthens the case against lockdowns — especially in poor countries. END_OF_DOCUMENT_TOKEN_TO_BE_REPLACED

“In 1967, Weinberg published a seminal paper laying out how two of the universe’s four fundamental forces — electromagnetism and the weak nuclear force — relate as part of a unified electroweak force. “A Model of Leptons,” at barely three pages, predicted properties of elementary particles that at that time had never before been observed (the W, Z and Higgs boson) and theorized that “neutral weak currents” dictated how elementary particles interact with one another. Later experiments, including the 2012 discovery of the Higgs boson at the Large Hadron Collider (LHC) in Switzerland, would bear out each of his predictions.”

That’s from the UT News obituary to Steven Weinberg (1933 – 2021), who passed away in Austin TX on July 23rd. A bit more from it: END_OF_DOCUMENT_TOKEN_TO_BE_REPLACED

In a comment to a recent post on monopolies, Viveka wrote, “I will cheer the day a Google or Amazon is broken up into a bunch companies. That day is not far off.”

As the old witticism goes, be careful what you wish for because you may get it. Don’t assume that the breaking up of very large corporations because they have market dominance is necessarily a  good thing. Large corporations are large for reasons that we may not appreciate — especially if we think like engineers. Engineering is a fine and necessary profession, and engineers have enriched the world in countless ways. But it has its limitations. END_OF_DOCUMENT_TOKEN_TO_BE_REPLACED 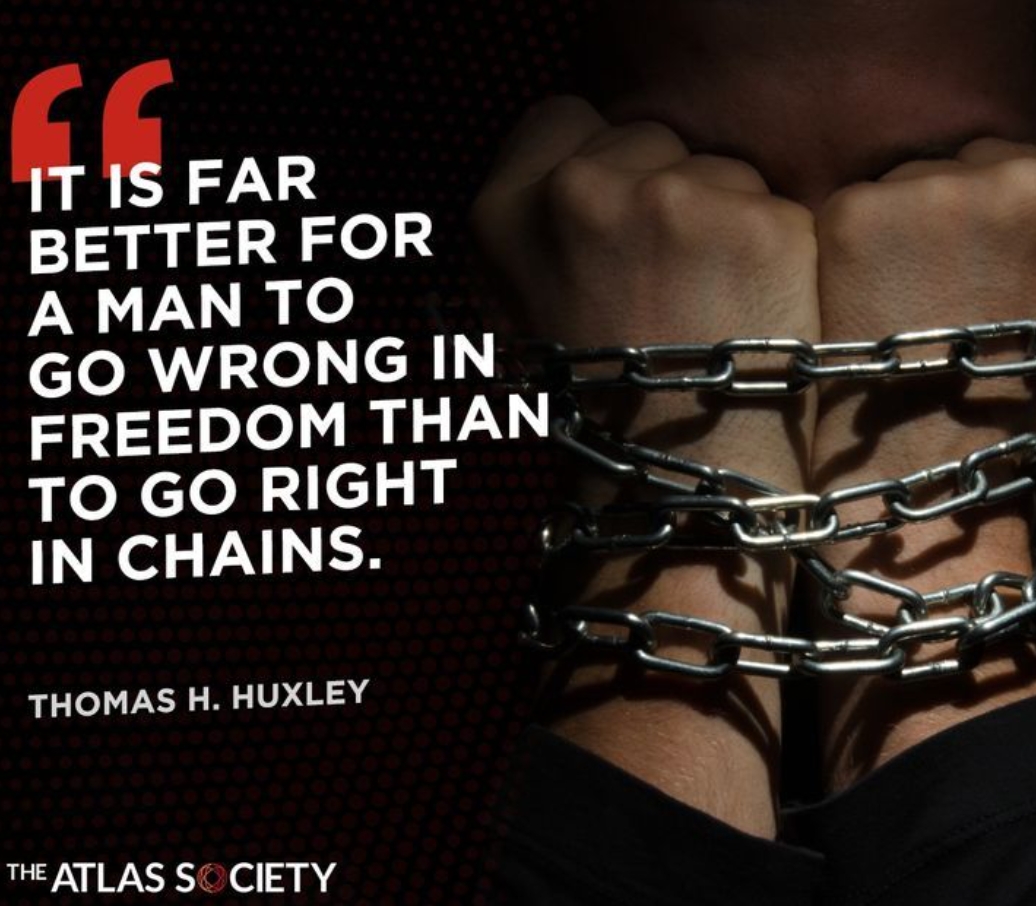 “It is far better for a man to go wrong in freedom than to go right in chains.” That’s Thomas Henry Huxley (1825 – 1895), also known as “Darwin’s Bulldog” for his spirited advocacy of Darwin’s theory of evolution.

Fun fact: Huxley coined the English term “agnostic” in 1869. “It simply means that a man shall not say he knows or believes that which he has no scientific grounds for professing to know or believe.” The concept of agnosticism goes back to antiquity, however. The wiki says,

I think the greatest strength of Hinduism — and what sets it apart from the monotheistic religions — is that it admits skepticism and agnosticism. The “Creation Hymn” of the Rig Veda addresses the question of who or what created the universe: END_OF_DOCUMENT_TOKEN_TO_BE_REPLACED

“I am confused about the correctness of government interference to break monopolies. Sometimes I think this is good. I do believe that a free market without competition is terrible. But if the government starts deciding what a “monopoly” is and what is not, we have just let in a thin wedge that can corrupt free markets beyond any limit. But then, if the government does not break monopolies, who will? Can the free-markets self-correct? Has it ever happened in practice?”[1]

Those are not easy questions to answer in a blog post since the issues involved are many and far from trivial. Volumes have been written on the definition and analysis of the economic concept of monopoly, and experts frequently disagree on what, if any, harm monopolies do, and what should the policy response be.

My thinking has evolved since I first began learning economics. Trained in the neoclassical tradition, I used to think that monopolies were harmful for the economy, and therefore government intervention was required to break them up for economic efficiency and consumer protection. However, the more I studied Austrian economics, the more I realized that monopolies weren’t the great threat to economic health as they were made out to be. END_OF_DOCUMENT_TOKEN_TO_BE_REPLACED

In a comment addressed to Prabhudesai, Engr. Ravi wrote, “Food has already become the first limit that we have hit, so be careful about what you bet your money on.”

Advising care in placing bets is excellent advice which ought to be followed. Talk is cheap. Placing bets is not. So I suggest a bet.

I am willing to bet money that food will continue to become less scarce. I bet that in 10 years, a basket of food items which costs $1,000 today, will cost less than (inflation adjusted) $1,000. If it costs more, I will pay the difference to the person(s) on the other side of the bet; if it costs less, I am owed the difference from the person(s) on the other side. For example, if the basket costs $900, then I’m owed $100; if the basket costs $1200, then I pay $200.
END_OF_DOCUMENT_TOKEN_TO_BE_REPLACED