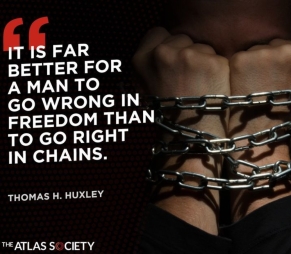 “It is far better for a man to go wrong in freedom than to go right in chains.” That’s Thomas Henry Huxley (1825 – 1895), also known as “Darwin’s Bulldog” for his spirited advocacy of Darwin’s theory of evolution.

Fun fact: Huxley coined the English term “agnostic” in 1869. “It simply means that a man shall not say he knows or believes that which he has no scientific grounds for professing to know or believe.” The concept of agnosticism goes back to antiquity, however. The wiki says,

I think the greatest strength of Hinduism — and what sets it apart from the monotheistic religions — is that it admits skepticism and agnosticism. The “Creation Hymn” of the Rig Veda addresses the question of who or what created the universe:

Who knows for certain? Who shall here declare it?
Whence was it born, whence came creation?
No one knows whence creation arose;
and whether god has or has not made it.

I take every opportunity I get to point to Sagan’s lovely segment on Hinduism in his Cosmos TV series. This post will be no exception.

Here’s a very old post related to Hinduism. It’s from 2002 — nearly 20 years ago — reposted in 2005. I titled it “Billions and Billions.” If you do read that post, you’d notice the lengthy comments by readers. Those were the glory days of blogging.

3 thoughts on “Huxley, Freedom and Hinduism”