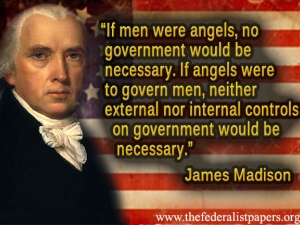 We take the existence of governments for granted. This is understandable since we have been under some form of government all our lives, and we also believe that some form of government must have existed for as long as recorded history. Government appears to be something as natural as the air we breathe, and therefore we are easily persuaded that it must be as necessary as air. Not just necessary but also that it is a net positive. This does not stand scrutiny, however.

So let’s go from a description of what the government is (positive analysis) and based on that, we proceed to the prescriptive part (normative analysis.)

One hundred years ago in 1919, Max Weber (1864 – 1920) in his essay Politics as a Vocation concisely defined the state as that “human community that (successfully) claims the monopoly of the legitimate use of violence within a given territory.” For the purposes of the following discussion, I am equating the state with the government of the state. The government is the organized political group that exercises authority over a particular territory.

The counter argument would be, why not allow the government to take care of social problems? The point here is that using the government to address any problem other than those that inherently involve violence introduces violence in the system. The power of the government flows out of the barrel of a gun. Admitting government involvement in any matter is allowing violence to settle matters.

Every society has to address collective action problems. Some things we can do individually but there are other things that we can only do collectively. The classic example is draining a swamp that abuts the land of two farmers. Each farmer gains from draining the swamp but not enough to cover the cost of doing so on his own. If the net combined benefit to the two farmers is greater than the cost, then it makes sense for them to agree to share the cost of draining the swamp.

Every person would like to be secure in his self and property. The aggregate cost of each person defending himself and protecting his property would be extremely high compared to the cost of collectively funding some protection agency that will secure everyone’s property. By giving that agency the monopoly on the use of force, the collective gains net benefits.

That is the rationale for a government. But the government could go rogue. Instead of protecting the people, it could become a predatory and extractive force. It could become Dr Frankenstein’s monster that destroys its creator.[2]

So here’s the problem. For our own security, we need an institution which has the monopoly on the use of violence. But we need to also prevent that institution from using violence against us.

I will pause here with James Madison’s eloquent quote from the Federalist Papers No. 51 (Feb 1788):

In the next bit, I will argue why it makes sense to prohibit the government from certain domains, and how to enforce that prohibition.

{As it happens, just a little over a year ago, I had written about this matter. See “What Should the Government Do?” from Oct 2018.}

Political science asks positive and descriptive questions. Positive analysis tells you what is. What is the government? What are its effect on human society? What have governments done historically?

The normative (or prescriptive) have to have some basis on the positive (or descriptive.)

[2] Dr. Frankenstein was the creator of the monster, and not the monster.