When asked why he was resigning from a particular country club, Groucho Marx’s explanation was “I don’t want to belong to any club that would have me as a member.” That he was allowed to enter meant that the club’s standards were low, and therefore he’d not want to be a member. Very droll. Anyway, there’s an obvious asymmetry between entry and exit.

Most public access buildings in the US have this feature: you may not have free entry into a building but must have free exit. You may be prevented from entering but you cannot be prevented from exiting. In fact, exit doors open away from you, not toward you, and they have “panic bars” that you push against to get out and not have to fidget with a handle or door knob if you need to get out in a hurry.

If you are not allowed free exit once you are in, you are talking about criminal gangs (like the mafia), communist/socialist regimes (erstwhile USSR), regressive regimes and religious cults (Saudi Arabia, Islam.) Freedom to leave is usually an associated part of other freedoms usually encountered in open societies. 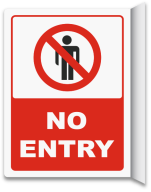 All countries impose restrictions on entry but only not-free ones need to erect barriers to exit because without restrictions, too many people would leave.

You wouldn’t want to become a member of a club even if they plead with you to join, if you could never stop being a member. Something similar happens with stupid labor laws.

If the labor laws are such that it is extremely costly to fire employees, then employers will be extremely cautious in hiring. What at first glance appears to be in the employees’ favor turns out to be harmful to their interest. That is a situation where the employer does not enter for fear that he won’t be able to exit.

Open societies allow people freedom — to contract, to exchange, to leave. Within open societies you are free to even form your own closed enclaves or clubs. For example, you can have your socialist organization embedded in a free-market capitalist country. The converse is not possible: you cannot form your own oasis of freedom in a closed, repressive society.

Societies that allow freedom of association, and the right to free exit are good. Forcing people to do what they don’t wish to do leads to conflict and grief that can be easily avoided.

I think it would be marvelous if India became a free and open society.

5 thoughts on “The Asymmetry between Free Entry and Free Exit”