The day may come when Shri Narendra Modi becomes the PM of India. All of us who fear and dread — chief among them Antonia Maino & her minions such as Diggy Singh, Shashi, Sagarika, Rajdeep, Barkha — that awful day are in good company. It is being reported that dear old Adolf too would not like Modi to lead India. Oh the humanity. Here, take a look.

In the original scene, Hitler is told that his reign of power is over; he then deafens himself to reality, eloquently savages everyone who cost him his dreams, vows revenge and finally resigns himself to private grief. The homemade spoofs plug into this transformation just about any hubristic entity that might come undone . . .

The meme of the parodies — the cultural kernel of them, the part that’s contagious and transmissible — has proved surprisingly hardy, almost unnervingly so. It seems that late-life Hitler can be made to speak for almost anyone in the midst of a crisis. 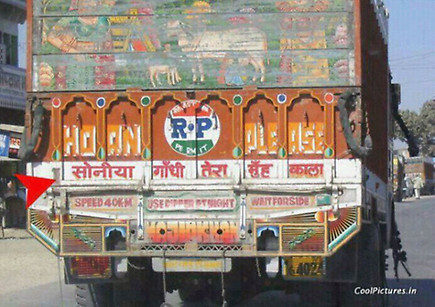 Spotted on the (information) highway. For those of you who don’t read Hindi, it reads (not a literal translation) “Sonia Gandhi, you are a disgrace & a shame.” Someone inform Diggy Raja.

Business Insider has a short feature, “Meet The 23 Richest Politicians In The World“, and Dr Manmohan Singh’s boss, Ms Antonia Maino aka Sonia Gandhi is listed as the 4th richest with wealth estimated between US$2-19 billion. This must have given Kapil Sibal and Digvijaya Singh the conniptions, and I am sure that it lends more weight to Dr Subramanian Swamy’s charges against AM aka SG. I am of course thrilled and here’s why.
END_OF_DOCUMENT_TOKEN_TO_BE_REPLACED

Kapil Sibal’s uncivilized behavior has to have the backing and protection of the Queen Antonia Maino aka Sonia Gandhi. As @vinod_sharma pointed out, “Sibal can’t be head of Gestapo unless there is a Hitler who wants him to do whatever it takes promote & protect him. Why silence about that?” Kanchan Gupta writing in Mid-Day, “A brazen attempt at political censorship” notes that censorship is nothing new: the Congress party and the Nehru-Gandhi family have a history of trying to dictate to the press and muzzle free expression.
END_OF_DOCUMENT_TOKEN_TO_BE_REPLACED

Dr Swamy is a national asset. I sometimes wonder why the Congress goons don’t bump him off. May his tribe increase. To increase awareness among Indians of the corruption charges against the Nehru-Gandhi-Maino clan, please circulate this widely.
END_OF_DOCUMENT_TOKEN_TO_BE_REPLACED

Sheela Bhatt’s piece in Rediff.com, titled “I will implicate Sonia Gandhi in the 2G case“, has interesting stuff on Dr Subramanian Swamy. Here are some excerpts, for the record.
END_OF_DOCUMENT_TOKEN_TO_BE_REPLACED

There’s something fascinating about the Congress party which is only infrequently noted. It’s a party of sycophants and brown-nosers. The better a person is at bending, bowing, scraping, groveling, and sucking up to the members of the Nehru-Gandhi family, the higher his or her position in the whole sordid hierarchy.
END_OF_DOCUMENT_TOKEN_TO_BE_REPLACED

India’s present predicament can be fully ascribed to the flawed policies of those who guided India’s destiny since 1947. The person most notable among the lot that set India along a disastrous path is Jawaharlal Nehru. Scores of places, institutions, roads, ports and government schemes are named after him. New Delhi, the city I am currently visiting, is festooned with not just his name, but the names of his relatives. Nehru Place, Kamala Nagar, Jawaharlal Nehru stadium, Jawaharlal Nehru University, Rajiv Chowk, Indira Gandhi International Airport, JN Urban Renewal Mission, . . . the list is virtually endless. And that is just in one Indian city. A comprehensive list of things named after the Nehru-Gandhi family would be tiresomely long. Indians have been fed tons of BS about Nehru and his clan. But truth eventually prevails, as the Indian motto Satyam Eva Jayate (truth alone prevails) says. Nehru was a communist.
END_OF_DOCUMENT_TOKEN_TO_BE_REPLACED

Censorship comes naturally to the Congress — since they have a lot of conceal and hide. It would be too damaging to their fortunes if Indians got to know the truth. The Indian motto reads, “Satyam Eva Jayate” (Truth Alone Prevails). The Congress have persistently tried to see that “Asatyam Eva Jayate” (Lies Alone Prevail). It did work in the past, and to some extent it continues to work. But times are a changin’ and it will not be long before Indians wake up to satya. END_OF_DOCUMENT_TOKEN_TO_BE_REPLACED