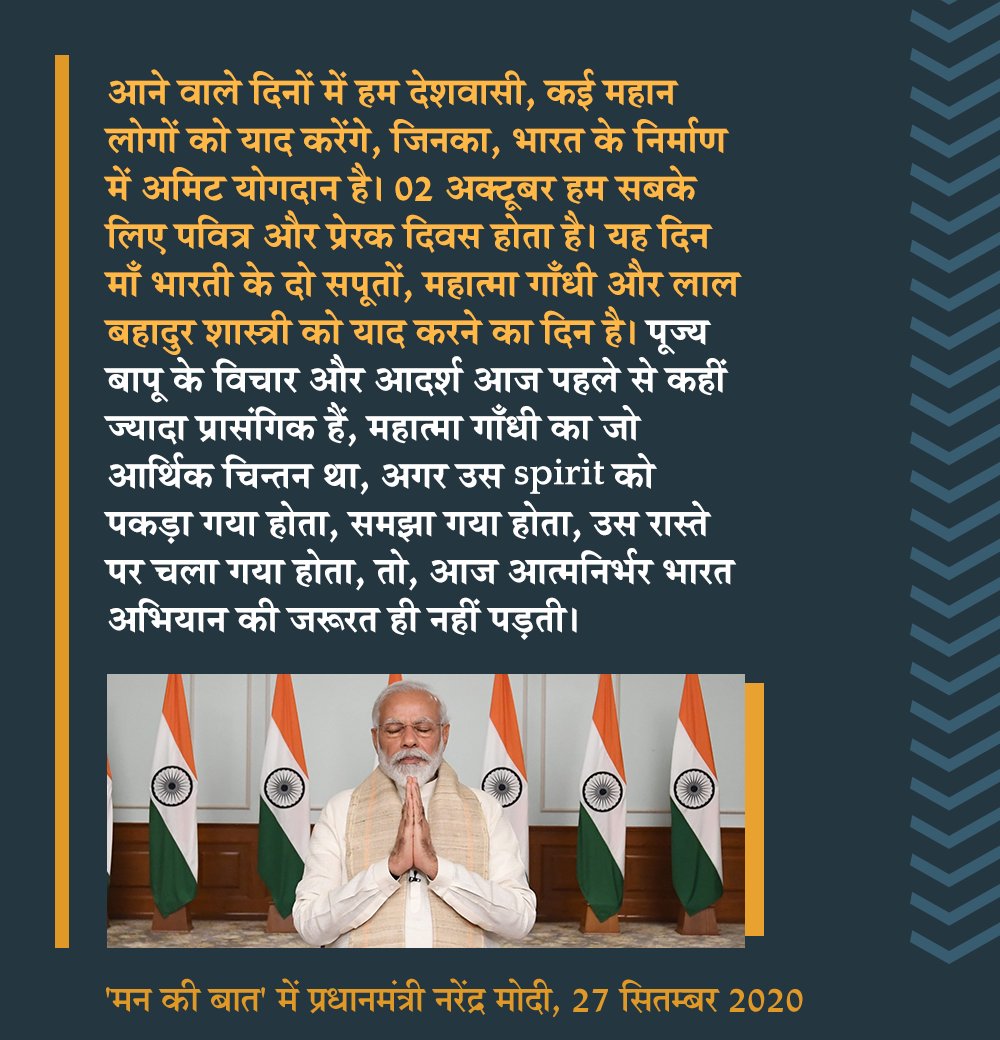 On social media Prime Minister Modi made these remarks on the anniversary of Mohandas K. Gandhi’s birth. Roughly translated from Hindi, he wrote in part:

“Oct 2nd is a sacred day. On this day we have to remember two of Mother India’s sons: Mahatma Gandhi and Lal Bahadur Shastri. Revered Bapu’s thoughts and ideals are important today, even more than before. If we had understood and adopted the spirit of Mahatma Gandhi’s economic thoughts, if we had taken that path, then we would not have needed the Atmanirbhar Bharat Abhiyan today. Gandhiji’s economic ideas were informed by a detailed knowledge and understanding of India. Bapu’s life reminds us to make sure that every action of ours benefits the poorest of the poor.”

We have to admit that Gandhi’s understanding of Indians was second to none. It could not have been otherwise because successful politicians have to know their constituents. Gandhi was arguably the most successful Indian politician, which he could not have been if he had not accurately read the Indian mind. He wasn’t very intelligent, knowledgeable, widely read or broadly educated. But intelligence, knowledge and education are not requirements for being a successful politician; in fact they may be serious handicaps. What is required to succeed in politics is shrewdness, cunning, self-assurance, gile, the ability to project virtue, talk the big talk, pander, scheme, conceal hypocrisy, charm the public, conceal the truth, fake it, divert attention and other such talents.

Since Modi brought attention to Gandhi’s economic ideology, I think it is important to examine what it was that Modi was praising. Let me pass a summary judgement on that before I go into a few details.

Gandhi’s economic ideas were some of the worst ideas ever expressed by any highly respected famous person. He was not just wrong about this or that bit; he was comprehensively clueless about the matter. His understanding of economics was so low that he did not know that he didn’t know anything about economics. It is no exaggeration to say that Gandhi’s economic prescriptions are a recipe for economic disaster and distress. He did know his public but he was absolutely ignorant of even the most basic principles of economics.

Now it must be admitted that economics is a specialized subject. We are not born with an instinct that leads us to know the basic principles of economics. That’s true of any specialized branch of knowledge. We have to learn those things. Without training you are not going to arrive at knowledge of economics any more than knowledge of quantum mechanics.

But there are important distinctions between economics and quantum mechanics. First, unless you are a quantum physicist, you can live a perfectly good life without knowing the first thing about QM. But if you don’t understand the basic principles of economics, you are at a considerable disadvantage in comprehending the world. Second, QM is hard, extremely hard. Most people (including yours truly) don’t have the intellectual horsepower to understand QM. But the basic principles of economics are not only easy to understand but it is delightful once you do. One doesn’t have to struggle at all.

I had had no exposure to economics at the undergrad (engineering) and postgraduate (computer science) levels. Only after I began studying economics did I realize how abysmally ignorant I was of the subject. Now I realize that most of what I thought was true about the world regarding economic matters was actually false. The most important principles of economics are counter-intuitive.

The fact is that most people are not only ignorant of economics but they are also ignorant of their own ignorance. (Cue reference to the Dunning-Kruger effect.) But most people don’t pontificate and prescribe economic policies. Even if they do, their idiotic pronouncements do not matter. However Gandhi was immensely influential, and therefore what he said mattered. And he said and wrote a boatload of rubbish on economic matters.

Take for example his strident opposition to industrialization. Machinery, in his opinion, was evil. It was evil because it deprived people of a livelihood because they were labor-saving. The problem is that he did not understand that the whole idea is to use the least effort possible to produce the things we wish to have; it is not employment we care about but consumption — which cannot happen without production. Labor is a means, not an end. Confusing means and ends is particularly silly for any sane person.

Machinery does not cause unemployment. Machinery produces more — and if you are concerned about the elimination of poverty, you should be in favor of industrialization. There are good analytical reasons for this but if you need to convince yourself, notice that industrialized countries have less poverty, and that non-industrial countries (such as India) have deep poverty.

What Gandhi proposed was not a solution to poverty — which I suppose he opposed — but a recipe for poverty. Gandhi was in favor of people living in villages and not in cities. Another plank in the platform that produces poverty. He idealized villages — mostly because he did not understand the misery people have to suffer in villages. Ambedkar knew that, and appreciated the need for urbanization.

Gandhi thought that railways are evil. He said that you should not travel any further than your legs could take you. Silliness doesn’t come packaged in more potent doses.

Gandhi had a shibboleth: “Recall the face of the poorest and weakest man you have seen, and ask yourself if this step you contemplate is going to be any use to him.”

That’s totally ass-backwards. That’s not how the world works. If that was the touchstone creative people used, there’d be scant progress in the world. We’d be stuck in stone-age poverty. Most — if not all — human progress depends on people doing things that have no conceivable immediate application in alleviating anyone’s misery, rich or poor. All basic advances in mathematics and the pure sciences are totally devoid of telos. It’s pure play. It’s done just for the fun of it. Ramanujan’s theorems were not aimed at helping anyone, rich or poor. But his theorems continue to solve real world problems that help everyone.

Seriously, Gandhi was not a very wise person.[1] But here we are focusing on something far less demanding: simple common sense. Consider the “atmanirbhar” thing that Modi we referred to at the top of this piece. The word means “self-dependence” or “self-reliance. It could also mean “self-sufficiency” or a combination of those notions. I am not sure what Modi means by it. But if it means self-sufficiency, then it is clearly a recipe for deepening poverty. The technical term in economics is autarky. Consume only what you can produce. In the context of a country, consume only what is produced domestically. No exports and no imports.

Gandhi was big into self-sufficient villages. Meaning autarky at the village level. That’s even more retarded than autarky at the level of a country. But let’s suppose atmanirbhar means self-reliance in the sense that one should not be a burden on others. Why that obviously simple idea requires a special grand governmental scheme is a mystery to me. Is it the claim that it’s a concept that Gandhi invented and without his guidance, average folks would not have realized that it’s not good to be dependent on others?

Well, the bottom line is this. Nothing prevents the political leaders from following Gandhi’s prescriptions. With the stroke of a pen, Modi can shut down the Indian railways — as Gandhi recommended. Shut down automobile factories. And the airlines. Close down all industries and get people to use only hand-spun cloth. Shut down all trade with others. Ban all medicines and only use natural products. Disband the armed forces. Stop the manufacture and imports of weapons.

I think Indians are quite incapable of recognizing hypocrisy and insincerity in their leaders. To some extent all politicians have to be hypocrites and  liars, I suppose. But Gandhi and his chelas take the friggin’ cake. That’s why they can talk absolute nonsense and nobody holds their feet to the fire.

Stupid is as stupid does.

[1] Gandhi’s ignorance is often parroted approvingly by millions of Indians. One of my favorites: An eye for an eye will leave the whole world blind. It’s the sort of pseudo-Christian “turn the other cheek” claptrap that Gandhi was so fond of. I wrote this some time ago:

That quote is often attributed to Gandhi but there’s some doubt about its veracity. In any event, it does appear to have the same kind of moralistic stench that finds so much favor among his devotees. It’s an idiotic belief. For a start, believing that an eye for an eye would leave the whole world blind necessitates the belief that all humans are bloodthirsty, vengeful savages with no compassion or kindness. This is patently false. Aside from a small percentage of sociopaths, humanity largely behaves according to the live and let live policy of mutual accommodation. This has to be so, for otherwise civilization would never have taken hold, and it would have been a Hobbesian war of all against all.

The sociopaths, small though in relative numbers, have to be deterred from doing harm to minimize the prevalence of violence in any society. If those who poke out others’ eyes were to believe that they would not be punished, a certain number of innocent people would become blind because violence would not attract any penalties. If ahimsa or non-violence implies a commitment to not respond to violence with violence, then many innocents would suffer. If instead, a credible commitment can be made ex ante that the perpetrator of any eye-gouging will have his eyes removed, then it would deter anyone who cares for his own eyes. This is based on the reasonable assumption that even sociopaths are rational and would want to preserve their eyes, even though they lack empathy and other fine human emotions.

4 thoughts on “Gandhi – The Economics Retard”