In any discussion on economic development, China invariably shows up. How did China manage an economic transformation that it now rivals even the greatest developed economy? Isn’t it amazing that China did that without being a democracy? Or maybe precisely because it is an autocracy that it could do what India, the largest democracy in the world, cannot do? 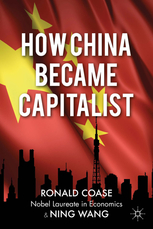 Those are not easy questions to answer because a story as large as China cannot be easily or quickly told. Big books have been written by reputed scholars on the subject. They are useful, instructive and fascinating. My personal favorite is the book How China Became Capitalist (2012) by Ronald Coase and Ning Wang.

Anyone seriously interested in understanding the economic rise of China should read Coase’s book. (Just by the way, Coase wrote that book at the age 101.) The publisher, Palgrave, gives this as the description of the book:

How China Became Capitalist details the extraordinary, and often unanticipated, journey that China has taken over the past thirty five years in transforming itself from a closed agrarian socialist economy to an indomitable economic force in the international arena. The authors revitalise the debate around the rise of the Chinese economy through the use of primary sources, persuasively arguing that the reforms implemented by the Chinese leaders did not represent a concerted attempt to create a capitalist economy, and that it was ‘marginal revolutions’ that introduced the market and entrepreneurship back to China. Lessons from the West were guided by the traditional Chinese principle of ‘seeking truth from facts’. By turning to capitalism, China re-embraced her own cultural roots. How China Became Capitalist challenges received wisdom about the future of the Chinese economy, warning that while China has enormous potential for further growth, the future is clouded by the government’s monopoly of ideas and power. Coase and Wang argue that the development of a market for ideas which has a long and revered tradition in China would be integral in bringing about the Chinese dream of social harmony.m [Source.]

I was motivated to write this post to respond to two readers, Sid and Namami. I discussed their questions with my friend Sudipta Chatterjee. He recommended two TED talks on the topic. They are excellent. It’s worth watching them. Here they are:

Understanding the Rise of China by Martin Jacques (2010).

and A Tale of Two Political Systems by Eric X.Li

Watching Li’s talk is thought-provoking. His claims are contestable — and that’s what Yasheng Huang did in a blog post “Democracy Still Wins.”

I will leave it here for the moment. In the followup to this bit, I will present my view on the matter. For now, I hope you watch those two videos and read Huang’s critique.

10 thoughts on “What Explains China’s Rise?”