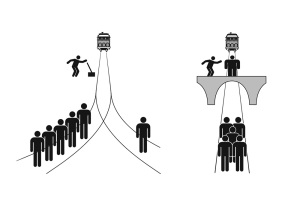 The trolley problem posits the scenario that the trolley would kill five unsuspecting people along its tracks but by pulling a lever it can be sent along a different route where only one person would get killed.

Would you pull the lever?

The trolley problem is a hypothetical intended to provoke discussion and to illuminate moral dilemmas that people face in real life. In my view, it is good to work through hypothetical so as to arrive on general principles that could be applied if the situation arises. It could spare one pointless agonizing and indecision.

My core principle is never to initiate aggression against another. Pulling the lever to redirect the trolley to kill only one person is willfully aggressing against that person. I will not do it.

To my mind, a version of non-aggression principle (NAP) is the directive (often attributed to the Buddha), “First do no harm. Then try to do good.” I accept that.

First, do no harm. OK, that means I should not harm the fat man (if I had pushed whom, I would have stopped the trolley). That’s the constraint — don’t harm. Given that constraint, I see that I cannot do anything to save anyone under the circumstances. So be it. What I cannot change, I must accept. The constraint I face is freely chosen by me and is non-negotiable.

Is it fair? It may or may not be. But I am not aiming at perfecting the world.

One final point. Should one try to do good? Yes but with the greatest caution. Good intentions are not sufficient, and are dangerous if one does not fully understand the situation. I hope not to be like the monkey who said to the fish, “Let me save you from drowning” and put it up on a tree.

(This post is recycled from an answer to a question on Quora: “Would a libertarian pull a lever, redirecting a trolley to kill one person instead of five people?”)

One thought on “Why I will not pull the lever”