The economic growth of any economy depends on how much is invested in creating productive assets in it. Factories, buildings, ports, the transportation network, natural resource extraction, manpower training, the use of modern methods of manufacturing, energy production and distribution networks — all require investment. Part of the investment arises from domestic savings, part from foreign borrowings, and part from foreign direct investment (FDI.) Let’s look at how India does in FDI compared to other countries.

Here I will not address what kind of changes need to happen for India to attract, say, 10 times as much FDI as it currently does. That’s feasible but not with the current policies and leadership. Anyway, here are the facts.

The following graphic is from howmuch.net. 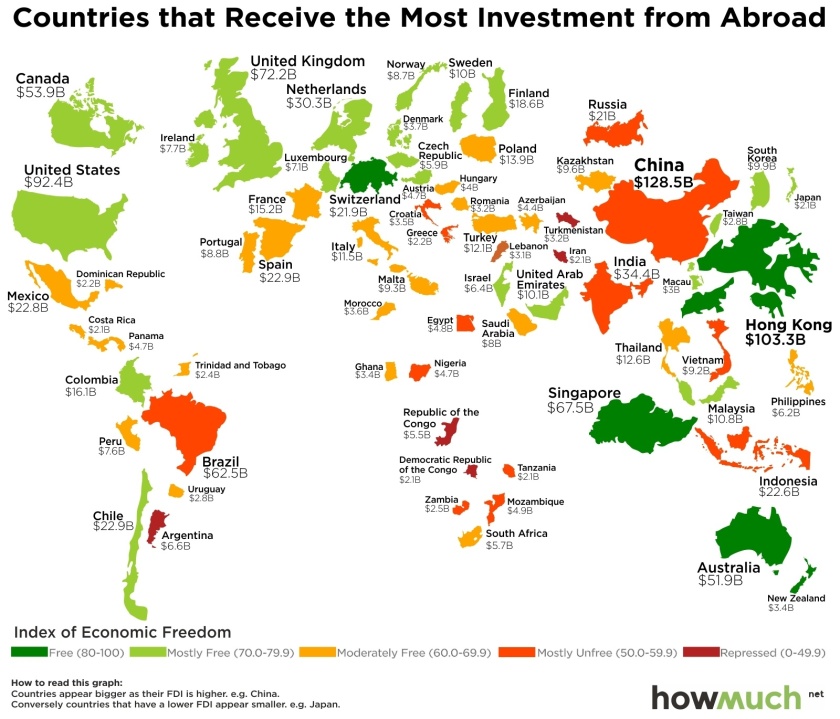 It is from “What Countries Attract More Foreign Investments?”

Note that the size of the images of the countries is in proportion to the FDI, and not their actual geographical size. Thus India (in “Mostly Unfree” red), which is vastly bigger than Singapore or Hong Kong (in “Free” green) in land mass, is shown much smaller than those two tiny regions.

The data allows us to draw broad conclusions. My interest lies in how India performs in FDI terms. The short answer is: DISMALLY. Why that is so, I will go into in a bit. But first let’s review the numbers.The graphic was published in July 2016, and the data are for the years 2014/15. Quote:

Top 5 Countries that Attract the Most Foreign Direct Investment

Top 5 in the Index of Economic Freedom (Free Countries)

India received $34.4 billion in FDI. That’s a quarter of what China received, and a third of tiny Hong Kong’s FDI. Since Hong Kong is part of China, the FDI for China as a whole is nearly seven times India’s FDI. That’s shameful, to put it very generously.

The empirical correlation between economic freedom and FDI is positive and causation can be analytically inferred: greater economic freedom translates into more FDI. (The explanation is simple and available upon request.)

There is a vast gulf between the FDI that India receives — an economically repressed country — and what Singapore (an economically free state) receives, for example. Singapore gets $67.6 billion, nearly twice as much as India. But until you normalize the numbers by population, you don’t get the real picture. Singapore’s population is less than 6 million and India’s population is over 1,200 million — around 200 times that of Singapore. Therefore Singapore’s per capita FDI is 400 times that of India.

Four hundred is a big multiplier. Imagine if you were paid $1 instead of $400.

Or take Hong Kong with its population of a little over 7 million and $103 billion in FDI. In per capita terms, Hong Kong got 520 times as much FDI as India. For every dollar an Indian receives in FDI, Hong Kong residents receive $520.

Five-hundred and twenty is an even bigger multiplier. Meaning, India receives on a per capita basis practically nothing compared to Hong Kong or Singapore. India’s performance is abysmally poor. Three cheers for Nehruvian socialism.

India is not just poor, it has been impoverished. India’s poverty has been engineered.

The surest method of impoverishing someone is to deny the person the freedom to be productive. In other words, enslavement guarantees poverty. Freedom is a necessary (although not sufficient) condition for prosperity. Comprehensive barriers to individual economic freedom translates into mass poverty on the aggregate.

In the graphic above, India is listed as “mostly unfree.” Indians are not economically free. Why? The reason is historical.

The British enslaved the Indian economy by putting in place an extractive and exploitative regime. The administrative and governmental institutions they created for that purpose was handed over intact to the Indian leaders who took over from the British when they left in 1947. India became independent but Indians never became economically free. Why? For the same reason that the British enjoyed ruling India. The system was designed to give enormous powers to the government and thus those in power enjoyed royal privileges.

It is understandable, therefore, that when Gandhi and his protégé took control of India from the British, they figured that they had a good thing going and saw no reason to lose those privileges by granting economic freedom to Indians.

This pattern of maintenance of this freedom-denying status quo has been seen in every subsequent transition of power. Different political parties and coalitions take over but Indians continue to lack freedom. Just note what happened in the latest transition in 2014. The BJP and its NDA partners came into power with overwhelming majority in parliament but they continued (and even doubled-down on) every major economic freedom-denying policy of the Antonia Maino UPA government.

The British to Blame?

Mind you that I am not blaming the British for impoverishing India post-1947. They were the colonial masters and they did what was in their interest. The weak get ruled. That’s the law. What I find hard to countenance is how Indians continued to betray their own kind in their lust for power, wealth and control. So even after 70 years of independence, India languishes at the bottom of the heap. Although it is not a failed state, it is an economic basket case.

But can one reasonably assign all the blame to Indian politicians and bureaucrats alone? Honestly no. Indians have a collective responsibility for what they suffer or enjoy.  Actions have unavoidable consequences.

The answer to why Indians are not economically free has to ultimately be because Indians don’t value freedom and therefore they don’t demand it. Perhaps Indians have a hard time imagining what economic freedom is, having never really tasted it. Sure they do have the freedom to vote. (And we are all aware of the great treasures they vote into office.) But political freedom is not worth a damn absent economic freedom.

Not that we need to pull out the big guns to make the simple case that economic freedom trumps political freedom when it comes to material prosperity, let me do that just the same. Here’s a 91-year old Milton Friedman in conversation with Gary Becker back in 2003.

Here’s a rough transcription of what Friedman said (beginning around the 34 minute mark in the video below):

You can have economic freedom without political freedom, provided you have a large measure of civic freedom.

Notice that Friedman mentions Hong Kong and Singapore — two economies that are in the top FDI list and in the economic freedom list.

After decades of considering the question of India’s lack of prosperity, I have concluded the following:

Gurudev Rabindranath Thakur wrote Gitanjali about a land of freedom into which he wanted his countrymen to awaken. We are far from there. A billion people have to freed to get there.

And now for a shameless plug for a new initiative that we call “Free a Billion.” The idea is really very good, and certainly much better than the cheesy, hackneyed, unimaginative logo would lead you to believe. FAB—Free a Billion—is not one of those flag-waving jhanda uncha rahe hamara kind of deal. The main idea is to make people realize that they can—and must—get behind a struggle for real freedom, and not just be content with the fake freedom of socialism. Go take a look.

Be well, do good work, and keep in touch.