All processes in our universe, from the sub-atomic to the super-galactic, involve the use of energy. The fundamental laws of thermodynamics attest to that. So it should come as no surprise that energy rests at the core of all human advancement and economic growth. The story of human civilization is principally that of an increasing ability to find and exploit energy sources. Until relatively recently in human history, animals and humans were the principle sources of energy. Slavery was an unfortunate consequence of that need for energy. Coal later powered the industrial revolution. The discovery of petroleum oil about 150 years ago literally fueled such phenomenal growth that it increased human population six-fold to its present over 6 billion.
END_OF_DOCUMENT_TOKEN_TO_BE_REPLACED

The Dec 2007 issue of Pragati is out. Click on the image below for a pdf copy of the magazine. 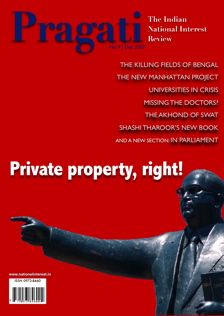 I have a piece on why India should invest in solar power R&D (which is posted here on this blog.) Quick look at the content below the fold. END_OF_DOCUMENT_TOKEN_TO_BE_REPLACED