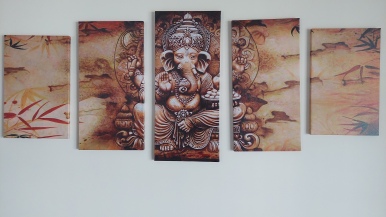 This is a tradition I stick to. I try to post on Ganesh Chaturthi every year, and today is no exception.

Born in Nagpur, Maharashtra, two Hindu festivals were paramount for me — Durga Puja is common to all Bengalis, and then there’s Ganesh Puja which is common to people in Maharashtra. That’s central to who I am.

My home in the US is sparsely decorated but I have a wall-hanging in the kitchen. It was a house-warming gift from my friend Yoganand. That’s a picture of it at the top of this post.

Most Hindu homes, even in the US, have Ganeshas at their thresholds . Not just that, practically every vehicle owned by a Hindu has a Ganesha riding on the dashboard. I have always had one in every car I owned. Safety is what Ganesha is about.

Ganesha is the first “god” we Hindus worship. I put that word “god” in quotes because I think it’s the most confused word in English. It doesn’t mean anything at all like it means to the Abrahamic faiths. The second-most confused word is “religion.” They are totally meaningless and content-free words in the English language. I will go into that later.

For now, I have to say that I am an atheist — meaning I have no need for any “god” — but that’s totally consistent with my being a Hindu. Most people don’t know that atheism is consistent with Hinduism, Jainism and Buddhism. Most people mistakenly believe that belief in “god” is required for one to be religious but that’s not true.

Anyway, I should explain my relationship with Ganesha. He’s the “vighana haran” which means he is the “remover of obstacles.” Every time I have a tough row to hoe, I make a deal with Ganesha. The deal is that if he gets me through, I will give him five rupees worth of candy (modak in Marathi.) The guy always comes through. He just loves sweets and is so easy to bribe. As an economist, I appreciate that: he gets his sweets and I get my job done. Both of us gain from the trade. Trade is what we economists care about.

You may wonder why of all the 330 million Hindu “gods” that Hindus worship, Ganesha is my favorite. It’s because he loves learning and wisdom — things that I care about. He was the scribe for the epic poem Mahabharata that the sage Vyasa dictated.

For those who do not know this amazing fact, Vyasa composed a huge poem — 100,000 verses, no less — that foretold what was to happen in a great big confrontation between two dynasties, the Pandavas and Kauravas.

But Vyasa could not be bothered to write it down. No, sir, he was too high and mighty to write stuff down. So the great god Bramha (the other two of the Hindu trinity being Vishnu and Shiva) told Vyasa to give the job to Ganesha. Alright, Ganesha said, I’ll do the job. But on the condition that Vyasa dictate his poem in one unbroken stream and must not backtrack to edit what was already recorded.

Vyasa agreed. But he had his own condition: that Ganesha must not write any of Vyasa’s utterances until he (Ganesha) understood the full implications of what was said in all its complexity. Ganesha agreed, and thus we have the Mahabharata, as dictated to Ganesha by Vyasa.

This is important to note. Ganesha was no simple scribe. He was required, according to his contract with Vyasa, to understand what the point was. And therefore Vyasa could not make any loose statements. It was a tough job but both the guys did their jobs.

Let’s close this bit with a song. I listen to this on Ganesh Chaturthi:

It’s long and therefore not likely that everyone reading this would care about. But no matter. Kishori-tai is good. Listen.

One thought on “Ganapati Vighan Haran”