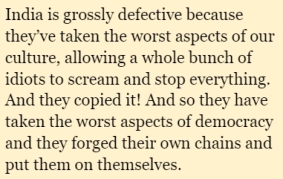 Charlie Munger is not a fan of India. In February of 2017, the then 93-year old vice chairman of Berkshire Hathaway said this about India in a speech. Anyone who cares about India, and understands what India is, will find his view hard to take. But Munger accurate in his assessment. Here’s a bit from his speech:

“Now you turn to India. And I would say, I’d rather work with a bunch of Chinese than I would the Indian civilization mired down, caste system, over-population, assimilated the worst stupidities of the democratic system, which by the way Lee Kuan Yew avoided, it’s hard to get anything done in India. And the bribes are just awful. So, all I can say is, it’s not going to be easy for India to follow the example of Lee Kuan Yew. I think that India will move ahead. But it is so defective as a get-ahead…the Indians I know are fabulous people. They’re just as talented as the Chinese, I’m speaking about the Indian populace. But the system and the poverty and the corruption and the crazy democratic thing where you let anybody who screams stop all progress? It mires India with problems that Lee Kuan Yew didn’t have. And I don’t think those Indian problems are always easy to fix. Let me give you an example.

“Lee Kuan Yew would have done it in (Singapore). India is grossly defective because they’ve taken the worst aspects of our culture, allowing a whole bunch of idiots to scream and stop everything. And they copied it! And so they have taken the worst aspects of democracy and they forged their own chains and put them on themselves. And so no I do not like the prospects of India compared to the prospects of…and I don’t think India’s going to do as well as Lee Kuan Yew.”

Munger is a big fan of Lee Kuan Yew. So am I. Like me, Munger understands that India’s greatest enemy is its government. So do I. Munger is a huge fan of Costco. So am I. I tell you, great minds think alike. But seriously, every problem that India faces is due to the misgovernance.

It is hard to avoid blaming Indians for the lousy leaders they elect. First, they are not very keen on understanding the problem. And when they are faced with hard truths, too many are too ready to find excuses to deny the reality.

I came across a bunch of comments from Indians about Charlie’s remarks in a blog (which I will not link to.) Screen shot of the comments:

The comments reveal a lot. “… May be with the Chinese system, this progress could have been greater, but that is the price of freedom.” That’s exactly wrong. Freedom does not impose a penalty on those who have it. Instead, the reward of freedom is prosperity.

The biggest misconception one can have about India is that Indians have freedom. Indians are no more free under the Indian governments than they were under the British colonial government.

Time to bring this to a close. Here’s some advice from Buffett and Munger.

Be well, do good work and keep in touch.