“Her Majesty’s Government”, also known as the United Kingdom Government, is certainly not all evil but considered comprehensively across the centuries and around the world, it is as evil as governments get.

“Her Majesty’s Courts and Tribunals Service” administer civil and criminal justice through the courts of England and Wales (not Scotland and Northern Ireland). As part of that, Her Majesty runs prisons. UK prisons are not the worst in the world but it includes “Her Majesty’s Prison Belmarsh” which has the distinction of being “UK’s Guantanamo Bay”.

Julian Assange has been incarcerated in H M P Belmarsh since April 2019.  His “crime”? Exposing the criminal behavior of those who run the military-industrial complexes like Messrs. Bush and Blair. Which explains why the British government is punishing him by throwing him into Belmarsh and the US wants him extradited to the US.

Belmarsh is for the worst of the worst. Around a third of the inmates are Islamic terrorists.[1] 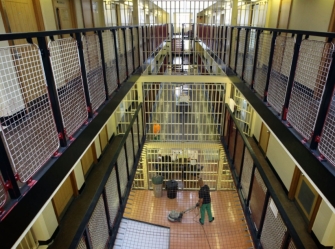 One mainstay of the inmate population are convicted terrorists. Abu Hamza al-Masri, an Egyptian cleric, was at Belmarsh until his extradition to the United States where he is serving life in prison on 11 counts of terrorism. Rams Mohammed, Muktar Said Ibrahim and Yasin Hassan Omar were were all incarcerated there for their roles in the 2005 attempted bombings of the London underground. Anjou Choudhry completed his sentence at Belmarsh for promoting the Islamic State of Iraq and the Levant. Michael Adebolajo and Michael Adebowale are identified as Islamic terrorists convicted of the murder of British soldier Lee Rigby in London. [Source: Julian Assange’s Nightmarish Future. April 2019]

The people of the UK are not as evil as you may expect them to be judging by their government. This is universally true: governments are worse than the people they govern. Economics explains why this pattern emerges. But people do eventually realize that they have been exploited and crimes have been committed by their governments, but unfortunately that comes about after the innocents have been murdered, often by the millions.

The lamentable fact is that we “See nations slowly wise, and meanly just, To buried merit raise the tardy bust”, as the great lexicographer Samuel Johnson (1709–1784) wrote.[2]

Two examples of raising tardy busts come to mind: both were geniuses, both were condemned for being homosexuals. Oscar Wilde (1854 – 1900) was imprisoned in the Her Majesty’s Prison Reading and that basically broke him and killed him.[3]

The British government also killed Alan Turing, one of a handful of geniuses of the 20th century CE. Convicted in 1952 of the crime of being gay, at the age of 43 he committed suicide in 1954. In 2009 — 55 years after Turing’s death — the British government offered an official public apology for “the appalling way he was treated”, and Queen Elizabeth II granted Turing a posthumous pardon in 2013.

My focus is on the British government because we’re concerned about what it is doing to Assange. Her Majesty’s Government will probably end up killing him, and half a century later, Her Majesty (or His Majesty) would  probably “pardon” Assange for his contribution to humanity. Who knows when and who can tell?

I know that I won’t have to “pardon” Assange after wrongly convicting him of crimes. I am not going to become slowly wise and then administer mean justice. I am doing my little bit in sounding the alarm that we have to resist the evils that governments commit.

That’s it for now. Do read the previous post The Bellmarsh Tribunal on this topic. Be well, do good work and keep in touch.

[1] This from a news article, Maximum security Belmarsh prison is ‘like a jihadi training camp’ —

Latest figures show that in the five years to December 31, 2014, the number of Muslim inmates at Belmarsh has more than doubled to 265, or 30 per cent of the total prisoners. This trend is London-wide. At HMP Isis in Thamesmead and Feltham Young Offenders’ Institute, Muslims now comprise 42 and 34 per cent of prisoners respectively, despite Muslims amounting to just 12 per cent of London’s population.

[2] From The Vanity of Human Wishes.

The vilest deeds like poison weeds
Bloom well in prison-air:
It is only what is good in Man
That wastes and withers there:

I know that poem by heart. Go read it here and marvel at it. Another bit —

And the wild regrets, and the bloody sweats,
None knew so well as I:
For he who lives more lives than one
More deaths than one must die.