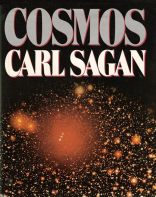 (The following is an excerpt from Carl Sagan’s Cosmos: A Personal Voyage, a 1980 TV series. This excerpt is form episode 10, “The Edge of Forever.”)
If the general picture, however, of a Big Bang followed by an expanding universe is correct – what happened before that? Was the universe devoid of all matter and then the matter suddenly somehow created? How did that happen?
In many cultures, a customary answer is that a “God” or “Gods” created the universe out of nothing, but if we wish to pursue this question courageously we must, of course, ask the next question – where did God come from? If we decide that this is an unanswerable question, why not save a step and conclude that the origin of the universe is an unanswerable question? Or if we say that God always existed, why not save a step and conclude that the universe always existed?
There’s no need for a creation, it was always here. These are not easy questions. Cosmology brings us face to face with the deepest mysteries, with questions that were once treated only in religion and myth.
“Who knows for certain? Who shall here declare it? Whence was it born? Whence came creation? The Gods are later than this world’s formation. Who then can know the origins of the world? None knows whence creation arose or whether he has or has not made it – he who surveys it from the highest regions. Only he knows, or perhaps he knows not.”
These words are 3500 years old. They’re taken from the Rigveda: a collection of early Sanskrit hymns. The most sophisticated ancient cosmological ideas came from Asia and particularly from India. Here there’s a tradition of skeptical questioning and unselfconscious humility before the great cosmic mysteries.

Amidst the routine of daily life, in say the harvest and winnowing of grain, people all over the world have wondered, where did the universe come from? Asking this question is a hallmark of our species. There’s a natural tendency to understand the origin of the cosmos in familiar biological terms – the mating of cosmic deities or the hatching of a cosmic egg or maybe the intonation of some magic phrase. The big bang is our modern scientific creation myth, it comes from the same human need to solve the cosmological riddle.

Most cultures imagine the world to be only a few hundred human generations old. Hardly anyone guessed that the cosmos might be far older but the ancient Hindus did. They, like every other society, noted and calibrated the cycles in nature: the rising and setting of the sun and stars; the phases of the moon; the passing of the seasons.

All over south India, an age old ceremony takes place every January, a rejoicing in the generosity of nature in the annual harvesting of the crops. Every January nature provides the rice to celebrate Pongal. Even the drought animals are given the day off and garlanded with flowers. Colorful designs are painted on the ground to attract harmony and good fortune for the coming year. Pongal, a simple porridge – a mixture of rice and sweet milk – symbolizes the harvest; the return of the seasons. However this is not merely a harvest festival, it has ties to an elegant and much deeper cosmological tradition.

The Hindu religion is the only one of the world’s great faiths dedicated to the idea that the cosmos itself undergoes an immense, indeed an infinite, number of deaths and rebirths. It is the only religion in which the time scales correspond, no doubt by accident, to those of modern scientific cosmology. Its cycles run from our ordinary day and night to a day and night of Brahma: 8.64 billion years long. Longer than the age of the earth or the sun, and about half the time since the Big Bang – and there are much longer time scales still.

There is the deep and appealing notion that the universe is but the dream of the God who, after a hundred Brahma years, dissolves himself into a dreamless sleep and the universe dissolves with him until after another Brahma century he stirs, recomposes himself and begins again to dream the great cosmic lotus dream. Meanwhile, elsewhere there are an infinite number of other universes each with its own God dreaming the cosmic dream. These great ideas are tempered by another, perhaps still greater. It is said that men may not be the dreams of the Gods but rather that the Gods are the dreams of men.