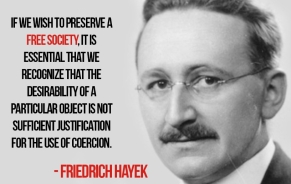 Herr Dr Prof Friedrich August von Hayek is one of my three favorite economists—the other two being James Buchanan and Milton Friedman. Like them, I too am a classical liberal. Since Hayek was born on May 8th, 1899, today’s a day to celebrate.

I confess that I did not fully appreciate the core lessons of economics until after I had finished my formal studies. I had learned the usual neoclassical stuff — including impressive looking math involving the calculus and maximization of twice-differentiable continuous functions, Lagrange multiplies and other sillinesses. I am not dissing the use of math; just that the mathiness is silly.

I had not learned what matters the most to me while I was in school. That had to wait until I discovered Milton Friedman. Friedman’s ideas resonated deeply with me because the idea of freedom lies at the core of my being. Reading Friedman led me to James Buchanan. Buchanan’s work on public choice theory was an eye-opener for me. I began to understand how politics and government work. Through Buchanan, I got to reading Hayek.

The theme common to all three is the idea of freedom. Freedom matters not just because of its instrumental value in creating prosperity but more importantly freedom is a final value because it is an essential component of human well-being and flourishing. If I had to choose between being free on the one hand, and being well-fed and comfortable on the other, I would choose freedom.

Hayek was an economist’s economist. He mainly wrote for professional economists and philosophers. The only book he addressed to the public was his The Road to Serfdom (1944). His body of work is large and much of his writing is rather formal and therefore not an easy read. But his ideas are absolutely marvelous. I agree with him almost totally.

Hayek was not an anarcho-capitalist. He did recognize a role for the state (as did Friedman and Buchanan.) That role had to be severely limited, though. He was against a welfare state but also advocated a social safety net that would guarantee the basic necessities of life to all.

I would like to list out some of the core ideas of Hayek that I especially like. But it will have to wait.  For now, I recommend his essay The Case for Freedom  which he published Oct 1960.

The case for individual freedom rests chiefly on the recognition of the inevitable ignorance of all of us concerning a great many of the factors on which the achievement of our ends and welfare depends.

If there were omniscient men, if we could know not only all that affects the attainment of our present wishes but also our future wants and desires, there would be little case for liberty. And, in turn, liberty of the individual would, of course, make complete foresight impossible. Liberty is essential in order to leave room for the unforeseeable and unpredictable; … It is because every individual knows so little and, in particular, because we rarely know which of us knows best that we trust the independent and competitive efforts of many to induce the emergence of what we shall want when we see it.

Humiliating to human pride as it may be, we must recognize that the advance and even the preservation of civilization are dependent upon a maximum of opportunity for accidents to happen. These accidents occur in the combination of knowledge and attitudes, skills and habits, acquired by individual men and also when qualified men are confronted with the particular circumstances which they are equipped to deal with. Our necessary ignorance of so much means that we have to deal largely with probabilities and chances. …

All political theories assume, of course, that most individuals are very ignorant. Those who plead for liberty differ from the rest in that they include among the ignorant themselves as well as the wisest. Compared with the totality of knowledge which is continually utilized in the evolution of a dynamic civilization, the difference between the knowledge that the wisest and that which the most ignorant individual can deliberately employ is comparatively insignificant. …

… all institutions of freedom are adaptations to this fundamental fact of ignorance, adapted to deal with chances and probabilities, not certainty. Certainty we cannot achieve in human affairs, and it is for this reason that, to make the best use of what knowledge we have, we must adhere to rules which experience has shown to serve best on the whole, though we do not know what will be the consequences of obeying them in the particular instance.

That essay is essential reading.

Happy Birthday to you, Professor Hayek, and may your spirit continue to promote freedom.