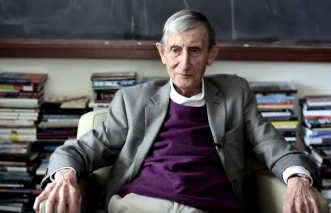 I was saddened, though not surprised, to learn that Prof Freeman Dyson passed away on Friday in Princeton NJ at the age of 96. I admired him immensely for his intellectual might, bravery and honesty. Thanks to the internet, I have had the great pleasure of gaining from his intelligence, his humanity, his wide-ranging interests, his unconventional ideas.

I agree with all his viewpoints that I came to know about, particularly about climate change. Like him, I believe that the problem is neither urgent nor the most important. Humanity faces many problems, has the capacity to do something about some of them, and some of them are worth allocating resources to now. But climate change isn’t in that set.

There are more important and urgent problems that must be addressed before spending a penny on mitigating the negative effects of climate change that are predicted to happen in 100 years — such as the higher global average temperate (of a couple of degrees Celsius) or sea level rise of a few centimeters. Sure those effects may impose costs on people decades hence but to spend trillions of dollars to block those would certainly doom a couple of billion people to unnecessary hardship and poverty today.

The trade-off between the uncertain minor benefit of the fabulously rich of the future and the certain immense cost of the desperately poor of the present is simple: care for the poor today and don’t worry about the rich of the future.

Here’s Freeman Dyson in a 2009 interview

e360: … it is important for you that people not take drastic actions about a problem that you are not convinced exists?

Dyson: Yes. And I feel very strongly that China and India getting rich is the most important thing that’s going on in the world at present. That’s a real revolution, that the center of gravity of the whole population of the world would be middle class, and that’s a wonderful thing to happen. It would be a shame if we persuade them to stop that just for the sake of a problem that’s not that serious.

And I’m happy every time I see that the Chinese and Indians make a strong statement about going ahead with burning coal. Because that’s what it really depends on, is coal. They can’t do without coal. We could, but they certainly can’t.

So I think it is very important that they should not be under pressure. Luckily they are, in fact, pretty self-confident; (neither) of those countries pays too much attention to us.

The Yale University interview Freeman Dyson Takes on the Climate Establishment from which I excerpted the bit above is worth reading if you have any interest in understanding the matter better.

Here’s a bit from an obituary in yahoo finance:

In a fascinating, controversial 2009 profile in the New York Times Magazine, called “The Civil Heretic,” Dyson stated that his concern was that measures to limit fossil fuels would hamper development in China and India and keep people living in poverty.

To Dyson, it’s a dispute about values. One the one side are environmentalists, who think, as he put it: “‘nature knows best’ and that ‘any gross human disruption of the natural environment is evil.’”

On the other side are “‘humanists,’ like himself, who contend that protecting the existing biosphere is not as important as fighting more repugnant evils like war, poverty and unemployment. Humans, he says, have a duty to restructure nature for their survival.”

To say that Freeman was a visionary would be an understatement. His vision was, I think, based on his amazing ability to reason using common sense and observation of reality.

In a remembrance article published in the MIT Technology Review, Arthur Jaffey of MIT writes:

I first met Freeman Dyson when I was a graduate student at Princeton almost 60 years ago. He already had a towering reputation, and was something of an enigma to my generation of students.

I recall that Dyson began his course on quantum theory by telling us, “If anyone tells you that they understand quantum theory, they are not telling the truth.” We were fascinated by his lectures, and so I invited him with a small group of friends for dinner. I remember him warning us that the biggest change in our lives would result from the economic development of China. This was a scenario that few people were prepared to believe would change the world to the extent that it has. No one predicted at that time how China’s economic emergence, and the accompanying government prioritization of education and research, would lead to the overwhelming pool of extraordinarily talented young Chinese mathematicians and physicists that we have today.

How many people in the 1960s would have conjectured that the biggest change in the world would be China’s economic rise?