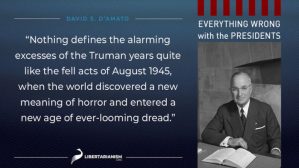 No, because monster “is too forgiving a word for his depravity.”

Lord Acton’s claim that “great men are almost always bad men”[1] holds broadly for the great leaders (men and women) of the world. I think the larger the nation or country, that tendency to badness in leaders tends to get exaggerated. The US produces some of the worst excesses of the abuse of power since the US is such a powerful nation. One example of a terrible person is Harry S Truman, who became the president of the US upon the death of President Franklin D Roosevelt in April 1945.

Here’s an article by  David S. D’Amato, “Everything Wrong with the Truman Administration“, which asks, “Was Harry Truman one of the worst terrorists of all time?” and answers, “If words mean anything anymore—then absolutely, yes.” END_OF_DOCUMENT_TOKEN_TO_BE_REPLACED