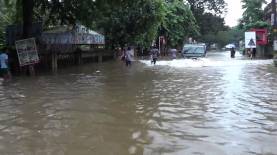 Kerala floods have washed up more than the debris and garbage you normally expect. It has revealed S Gurumurthy to be a true Gandhian.

Here’s a tweet of his that Gandhi would have approved of.

Supreme court judges may like to see if there is any connection between the case and what is happening in Sabarimala. Even if there is one in a million chance of a link people would not like the case decided against Ayyappan. https://t.co/0k1818QZGU

You see, Gandhi visited Bihar after the  8.4 magnitude earthquake of January 15, 1934 in which 30,000 people died. After due deliberation he declared that it was divine retribution for the sins of Indians. What a man!

That’s why I think Gurumurthy is a true Gandhian.

For your edification, here’s a post I wrote in 2010 on “Blaming People for Natural Disasters“.

6 thoughts on “S Gurumurthy is a True Gandhian”