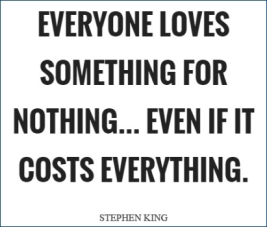 When the government gives something to some identifiable group, it cannot do so without taking (usually by force) from some other person or group. On the aggregate, the government does not produce the goodies it distributes. It merely takes through taxation what it intends to distribute, keeps part of it for its own consumption and distributes the remaining (often a very small part of what it takes) to certain groups to buy their allegiance.

This ability of the government to redistribute wealth has pernicious effects on social well-being. The first effect is that it attracts the most ruthlessly avaricious and the power hungry to seek control of the government.

Wealth creation requires effort. One has to work at it and thus earn wealth. Wealth acquisition, however, need not require as much effort if one can steal it from those who created the wealth. Being an agent of the government requires effort too but in general the payoff to that effort is the ability to acquire wealth incommensurate with effort through legalized theft which is called taxes.

The second effect of the government’s ability to steal from people is the disincentive for people to expend effort in creating wealth and saving. If the wealth you create is taken away from you (which taxation effects), it’s rational for you to not create as much wealth as you would have otherwise created. If most of your harvest is taxed away or stolen by marauding armies, you put in just that much effort as to grow what you can consume, and not bother with growing anything to save. Which hurts your potential to invest, and therefore the possibilities of greater consumption in the future.

Once that flush lever is pulled, society starts circling the drain, and there is no way out but down the tubes.

The empirical evidence supports the analytical story. Poor countries have rapacious, bloated governments that control much of the economy. So how do nations create wealth that hauls them out of poverty? Remember that at a not too distant past, all nations were dirt poor compared to today. Which came first: big government or rich nations?

The answer to that question is quite pedestrian. People create wealth through effort. They do so if they expect that they will get to consume part of that wealth, save and invest a part, and give away a part to whomever they wish. That’s called security of private property. You have to be alive to create wealth. That’s called security of life. If one has to worry about security of life, and the freedom to do as you choose, you are unlikely to create wealth. If we collectively decide to create an agency which will secure life and private property, we can all benefit. That agency is the start of government.

The proper role of the government is to ensure security of life and property. It’s variously called the “night-watchman state” or the “minimal state.” The minimal state does a policing job: it doesn’t dictate to you what you should do but instead what you should not do. You should not initiate force against another, and if another does initiate force against, the police is there to punish the aggressor.

The minimal state does require funding. General taxation is the usual way to achieve this.

Here’s the final point in this piece. Whether a nation gets a bloated kleptocracy (defined as the rule by the greedy) and from there into a kakistocracy (the rule by the least principled and the most corrupt) is not a matter of blind luck. In a very strict sense, the people choose the kind of government they get–regardless of the precise process they employ to choose who gets to govern, democratic or otherwise.

The people of some nations choose to restrict their government to the minimal state through institutional mechanisms. In modern nations, that institution is the constitution. The US is the prime example. The “Founding Fathers” of the newly minted United States of America wrote a constitution that defined the government with limited enumerated powers. The USA became the most powerful nation in the world in a little over two centuries.

Sadly the scope, size and the power of the US government has expanded, as was feared by the founders. The constitution that has served the US so well needs to be re-written so that the government’s powers are once again restricted.

Now back to the matter of India. The British colonial government of India was not a police state. It was an extractive and exploitative state, and naturally so because that’s the very purpose of colonization. India did not prosper under the British. The British departed eventually but the new management maintained the extractive and exploitative state. India did not prosper.

Hundred years of total British rule, followed by decades of Indian rulers following the same British rules, created what’s India today. Indians have collectively lost the ability to even notice that the government is their biggest enemy — that their poverty is imposed on them by the government. In the piece previous to this, I had pointed out that some people (most?) in India actually welcome higher taxes. That’s infinitely asinine. Only morons enthusiastically tread a path to their doom.