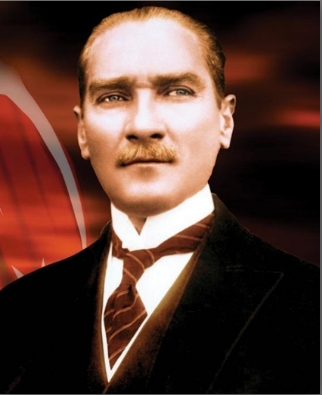 Now that the Islamization of Turkey is rapidly advancing under the Turkish president Recep Tayyip Erdoğan, there’s much grief, pain and suffering in store for that country. That’s what Islam does.

One man had tried to steer Turkey away from that fate: and had indeed succeeded to some extent. Mustafa Kemal Ataturk (1881 – 1938), a Turkish army officer and revolutionist statesman who was the founder and first President of the Republic of Turkey. He wanted Turkey to be a secular state, and naturally so since he was irreligious. But now Turkey is regressing into an Islamic state and will probably become a failed state in the decades ahead. That’s a real pity.

Here are a couple of quotes attributed to Kemal Ataturk. Source: Wikiquotes.

It is interesting that once Islam takes hold in a population, it is hard for it to shake it off. People try but the collective invariably regresses to the characteristic barbarism of Islam. Ataturk must be spinning in his grave.

India presents an interesting case history of the pernicious effects of Islam. After the British division of Indian into India and the two parts of Pakistan, you had a kind of a natural experiment. India, the non-Islamic bit is far ahead of the two Islamic bits. India is advancing while the two Islamic bits are regressing. Within India itself, those states that have larger Islamic influence, are fast falling behind. Check out UP and Bengal. Bengal is just a decade or so behind becoming the Islamic Republic of Bangladesh version 2.

Someone should poke Turkey with a fork. I think it is done. (It’s what we say around here on Thanksgiving — “Someone please check if the turkey is done.”)

One thought on “Kemal Ataturk’s Turkey is Cooked”