Mr Katju, who is a retired supreme court judge, provided his insights into “abolishing unemployment in India” on social media yesterday. According to him, Soviet Russia solved that problem by “raising the purchasing power of the masses, and thereby rapidly expanding the economy and consequently abolishing unemployment.”

Mr Katju explains in subsequent comments how the scheme is supposed to work. It’s about reducing prices to increase “purchasing power”, he says. I don’t think he understands what prices or purchasing power means.

I have appended at the end of the post a few screen captures of Mr Katju’s submission to facebook and a couple of comments from his readers.

Mr Katju notes the steps the Soviet government took included the steady lowering of commodity prices, stepping up production, and the creation of jobs that abolished unemployment. He further notes that while the US was suffering the Great Depression of 1929, the Soviet economy was “rapidly expanding.” While not endorsing the Soviet method for India, he says that India should do something so “we can raise the purchasing power of the Indian masses and thereby rapidly expand the Indian economy, which is the only way of abolishing unemployment in India.”

He ends by writing, “The central point, and therefore the main problem before India, is how to raise the purchasing power of the masses? Do we follow the method of socialist countries, or some other method?”

All statements to the effect that the socialist economy is still a going concern, are inoperative. It’s an ex-economy

That Mr Katju speaks approvingly of Soviet socialistic methods is rolling on the floor funny for a start. Why? Last time I checked (and that was over 25 years ago), the Soviet Union, like the Monty Python parrot, was no more.

“The Soviet Union has passed on. It has ceased to be. It’s expired and gone to meet its maker. It’s shuffled off this mortal coil. It’s run down the curtain and joined the bleedin’ choir invisible. Vis-a-vis the metabolic processes, it’s had its lot. All statements to the effect that the socialist economy is still a going concern, are inoperative. It’s an ex-economy.”

But seriously, the Soviet Union collapsed not because the people were stupid or that the huge empire did not have natural resources (it was immensely rich.) Its economic collapse was the result of idiotic policies made by people who had no understanding of reality.

Reality is unforgiving. Go against nature and prepare to be obliterated.

Water flows downhill. No amount of government-made legislation can make it flow uphill — not even some legislation that says we will gradually slow the downhill flow by 5-10% every 2 years or so, until over time water starts flowing uphill. Reducing prices 5-10% every 2 years or so, as Katju appears to approve of, leads to only one thing: shortages.

In undistorted markets, the price of a commodity is the price at which the quantity demanded is roughly equal to the quantity supplied. Let’s call it the equilibrium price.

Economists know that reducing prices by government edict is the quickest and surest way to destroy productive capacity.

Economists may or may not know much about the economy. But there is one thing they absolutely know: that reducing prices by government edict is the quickest and surest way to destroy productive capacity. It is as close to a “law of nature” as you can get in the social sciences.

In any well-functioning economy — the kind that we presumably wish to have, one in which people produce stuff in adequate quantities, in which there are no shortages, in which people are employed in creating wealth that they consume and save — prices are not arbitrarily determined by the whim of some all-controlling authority. Prices are critically important and cannot be tampered with without dire consequences.

Prices emerge from the decentralized activities of all economic agents (the producers and consumers), and it helps coordinate their activities. Those prices are the only reliable signals that economic agents use to decide what they have to do next. Without the accurate signals, the economy stumbles along like a blindfolded person who has no idea of which way to proceed.

Employment is a means, not an end.

Uncle Milt had some advice

In the 1960s, Milton Friedman on a visit to India, was taken to some public works site. An exchange went something like this. “Why were the workers using hand-held shovels to move earth instead of using mechanical shovels?” he asked. He was told that mechanical shovels would not employ as many people. He replied, “Then why don’t they use spoons instead of shovels? A lot more people would get employed.”

Futzing around with prices does not help

All dictatorial regimes have the power to dictate prices. And they too frequently do. They futz around with prices and wages. The predictable result is always and inevitably increased poverty. Why? Because when you fix prices, you essentially blindfold the producers, and that leads to lower production, not higher.

Even the mere suggestion that perhaps if the prices were reduced in minor steps that it would lead to some better outcome is insane. It’s as insane as thinking that by changing the compass directions, the sun would start rising from a different point on the horizon. The sun rises where it does and based on where the sun rises, we get our compass directions, not the other way around. Only an idiot would think otherwise.

Some idiots think that fixing prices will bring down poverty, or unemployment, or some such idiocy.

It’s my misfortune that I saw the tweet pointing to Mr Katju’s musings. I wrote a tweet expressing the hope that Mr Katju’s grasp of matters legal was better than his grasp of basic economics.

.@keshavbedi Hope @mkatju 's grasp of matters legal is better than his grasp of basic economics, which is that of an average 7-year old's.

Someone, , pointed out, “Katju was a supreme court judge. Seriously, let that sink in.” 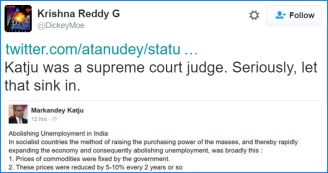 [The strike-through text above is a correction because Mr Krishna Reddy G subsequently told me that he was being sarcastic.]

The basic ideas of economics should form a part of everybody’s cognitive toolkit — including that of supreme court judges. Because not having them causes immense avoidable harm to society, as we can easily ascertain when we look at what happened to the Soviet Union, and what’s happening to Venezuela.

Among those basic economic ideas are those of division of labor and specialization. By dividing tasks, we become more productive, individually and collectively. That means a farmer can focus on growing corn, and trade his corn for all the various other bits he needs from others who themselves focus on their own various specializations.

Specifically, I can spend my energies mainly understanding economics by reading dozens of great thinkers who have spent their entire lives specializing in economics. I have to read the ideas of Smith, Ricardo, Mills, Bastiat, Menger, Mises, Schumpeter, Kizner, Knight, Hayek, Buchanan, Simon, Friedman, Coase, . . . (and others that non-economists have probably never heard of) in dozens of books and ponder their insights so that I can understand a little better what the nature of the beast is. It takes all my time, leaving me to rely on others for the fruits of their labor for my survival.

And if I need legal opinions, I would go check with some learned judge or lawyer about that because I don’t know that stuff, and what’s more, I know that I don’t know.

But if I get into the business of dishing out uninformed legal opinions, it would not be pretty — it would be as disastrous as when a learned judge starts pontificating on how to cure the various economic ills of a large economy.

My main point is that one should know the limits of one’s understanding and never stray out of it, for there be dragons.

OK, here’s a screen shot of the original submission. 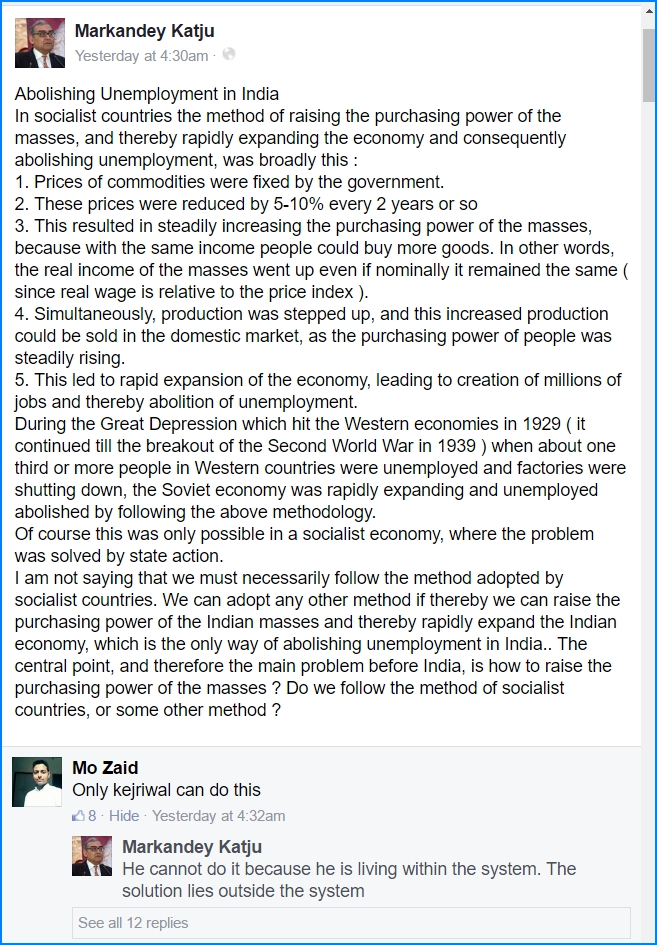 One commenter brings in some economic sense. 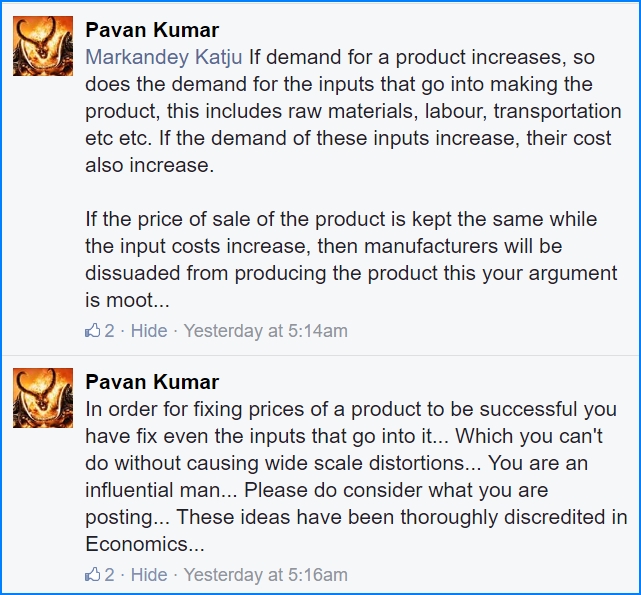 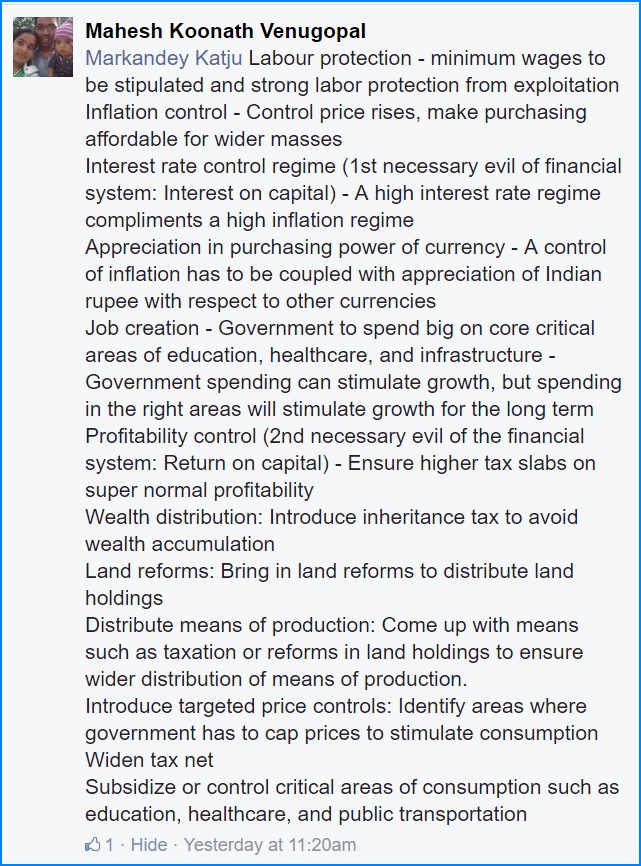 The moral of the story: get some basic economics literacy before offering solutions to nearly intractable macroeconomic problems.