One of the perils of reading newspapers in India is that you are exposed to some rather mindless nonsense. Sunday morning in Ahmedabad, I recklessly picked up a newspaper. It was the DNA Sunday. To my horror but not to my surprise, there was Sri Sri Sri Ravishankar’s hirsute image atop a column titled, “In love, losing is winning.”

So before we get to the column, let’s deal with the proliferation of “sri’s”. It used to be that the great and the accomplished were honored by others with a “sri” to their name – as in Sri Ramakrishna Paramahansa, Sri Aurobindo, Sri Krishna, etc. It’s not something that one plasters on to one’s name. Ravishankar sticks not one but two sri’s in front of his name. It is a repulsive sight.

Anyway, back to our column, “In love, losing is winning.” 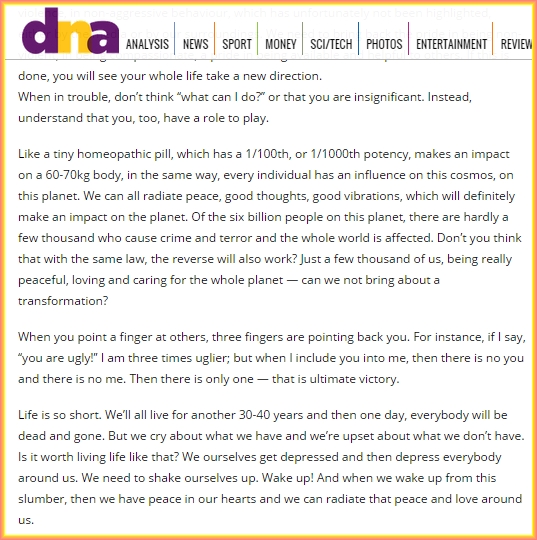 That line is hard to beat. In just five words, in just 22 characters, it packs so much inanity and illogic that merely reading that line kills a million brain cells. Making such a statement is plain unadulterated nonsense of course but then if SSSRC were to avoid the nonsensical, he might as well take maun vrat (a vow of silence.)

Logic and sense has never been the strong suit of god-men (and god-women) and their sainted followers. If logic was even remotely involved in the deal, that whole business and the attendant followers would not happen.

“In love, losing is winning.”

If losing is winning, then the loser is the winner, and the winner is the loser. So by losing, you win – which makes you a winner, and as you are a winner you are a loser, but that only means that you are actually a winner, which means you are really a loser . . . it is an infinite chain of insanity.

See what I mean? Insanity does not come in more potent form than that. What I can’t stop marveling about is that not only did SSRS make that absolutely contentless insane statement, but others involved in the chain that terminated in the column being printed in the newspaper – the reporter, the editor – did not find anything the least bit wrong with the statement. Compared to these people, sheep have been known to be more logical.

The headline should keep the wary from reading the piece. But anyway, for a change of pace, I decided that I will actually read the column to see what depths of inanity and illogic the man had plumbed.

For the record, here are a few select quotes.

When in trouble, don’t think “what can I do?” or that you are insignificant. Instead, understand that you, too, have a role to play. Like a tiny homeopathic pill, which has a 1/100th, or 1/1000th potency, makes an impact on a 60-70 kg body, in the same way, every individual has an influence on the cosmos, on this planet.

True true, SSRS looks average enough but his inanity influences millions of people. I like the homeopathy bit thrown in: that’s the bright red cheery on top of a heap of idiocy calling attention to itself.

When you point a finger at others, three fingers are pointing back at you. For instance, if I say, “you are ugly!” I am three times uglier; but when I include you into me, then there is no me. Then there is only one – that is ultimate victory.

Did someone say victory? Well, if you have the ultimate victory, don’t you have the ultimate loss? Oh what an idiot! Three fingers pointing back multiplying the effect of a statement is the sort of logic that would fail to impress even retarded people. What does the man smoke that he can make such asinine statements with a straight face? And what do his followers smoke?

Life is so short. We’ll all live for another 30-40 years and then one day, everybody will be dead and gone. But we cry about what we have and we’re upset about what we don’t have. Is it worth living life like that? We ourselves get depressed and then depress everybody around us. We need to shake ourselves up. Wake up! And when we wake up from this slumber, then we have peace in our hearts and we can radiate that peace and love around us.

No, really, I cannot bring myself to comment on this any more. My vocabulary is limited and I can only feebly describe SSRS’s statements as inane, insane, asinine, silly, ludicrous, ridiculous, senseless, stupid, unreasonable, illogical and empty. Those adjectives are all inadequate.

31 thoughts on “In Love, Losing is Winning.”