Christopher Hitchens once wrote “I think human civilisation only begins when people separate religion from the state. Policing that frontier, making sure of it, is a huge thing, culturally and politically. You realise that any attempt to cross it is poisonous – in the sense of lethal.” I am reminded of that while reading yet another account of human savagery in a land which was based on a lethal religious dogma. But be warned that this is rated R for violence. If you don’t have a strong stomach, skip the text and just go to the embedded videos.
END_OF_DOCUMENT_TOKEN_TO_BE_REPLACED

Most emphatically yes, if it is within your power to do so. A child accidentally falls into a river and your jump in without a second’s thought – assuming that you can swim – and save the child. But what if there are people who are thoughtlessly or even deliberately pushing children into the river. Should you continue to be fully engaged in saving the drowning children or must you at least tackle the problem where it originates, and go tie up the adults who are dropping children into the river? END_OF_DOCUMENT_TOKEN_TO_BE_REPLACED

On Sept 10th, Alan Turing received an apology from the British government 55 years after his death. Following a petition to 10 Downing St signed by 30,000 people, Gordon Brown formally apologized to the man who was so persecuted for being a homosexual that he committed suicide.
END_OF_DOCUMENT_TOKEN_TO_BE_REPLACED 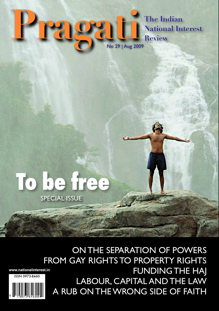 The August 2009 issue of Pragati is out. I have a contribution in there. My perspective is that the Indian government must stop subsidizing Muslims who go on haj, and the more general case that the government must stop meddling in private religious affairs of the citizens. The text of my article is below the fold, for the record.
END_OF_DOCUMENT_TOKEN_TO_BE_REPLACED

The question that faces West Bengal, a state in eastern India [1], appears to be whether a Bangladeshi author named Taslima Nasreen should be allowed to stay. The recent news is that “a minority fringe group” has demanded that Taslima be deported.

The answer is absolutely clear to me: she may stay or go depending on what the law of the land says. Rule of law is something that I consider non-negotiable. So the deeper question is whether India at large, and West Bengal more specifically, is a nation that is governed by laws? Or is it that those who carry the largest sticks, those who can inflict punishment on the nation can dictate what the rules should be?
END_OF_DOCUMENT_TOKEN_TO_BE_REPLACED

An accident is not a crime, and a crime is not an accident. That distinction kept playing in my mind as I thought of the incident in which a drunken driver, Alistair Pereira, killed seven and injured eight pavement dwellers in Mumbai one night last November. The case against him was ruled to be one of rash driving and not one of culpable homicide by a court. Pereira was handed down a six-month prison sentence and a fine of Rs 5 lakhs (approximately US$ 11,000.)
END_OF_DOCUMENT_TOKEN_TO_BE_REPLACED

Very cheap in India. Alistair Pareira, a 21 year old, in a fit of drunken driving, ran over a bunch of sleeping people a few months ago in Mumbai. He successfully killed seven (including one pregnant woman and two children) and injured eight others.

The driver is a rich kid. It is amazing how badly the police mess up an investigation when rich people are invovled in a crime.
END_OF_DOCUMENT_TOKEN_TO_BE_REPLACED

If you are in the mood for some thought-provoking hope-giving reading this weekend, I recommend Steven Pinker’s essay “The History of Violence“:

In the decade of Darfur and Iraq, and shortly after the century of Stalin, Hitler, and Mao, the claim that violence has been diminishing may seem somewhere between hallucinatory and obscene. Yet recent studies that seek to quantify the historical ebb and flow of violence point to exactly that conclusion.

The basic law of economics, of supply and demand, is a bitch. Like gravity, it is all-pervasive and you would have as much success overturning it as overturning the law of gravitational attraction or inventing the much sought after perpetual motion machine. It is primarily ignorance of basic physical conservation laws that makes designers of perpetual motion machines attempt the impossible. A similar lamentable ignorance of economics also impels people to act as if the iron law of supply and demand can be ignored.
END_OF_DOCUMENT_TOKEN_TO_BE_REPLACED