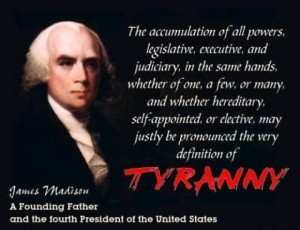 No sufficiently distant goal is achieved in one big step. But take enough number of small steps in the correct direction consistently, and you are guaranteed to reach your destination.

Recall the “digital” solution that Ajit, the archetypal Bollywood villain of the past, once adopted to get rid of the hero. He told his minions that they should put the hero in a computer. Why, the puzzled minions asked. Ajit said, “Bit by bit mar jayega.”

Indians are also getting that digital solution — where the means are technological and the end appears to be their total enslavement to the state. The government has all the powers that it needs to be in absolute control of what the citizens are allowed to do, what they must do, and what they must not do. It is  using those powers, bit by bit. And the citizens merely adjust to the government control of their lives without protest.

The danger is real, present and imminent. Here’s a piece I wrote for The Quint yesterday, for the record.  END_OF_DOCUMENT_TOKEN_TO_BE_REPLACED

Bureaucracy is hell. It is aggravating. Government bureaucracy is especially frustrating because the matters they deal with are monopolies — you don’t have a choice of going to some other service provider. And worst of all is the government bureaucracy of poor nations which is the worst of its kind. Indeed, much of the poverty of poor nations can be significantly attributed to the insanity of government bureaucrats and officials. That’s serious business since it costs lives. But even in the saner parts of the world, such as Canada, people do get fed up with bureaucratic idiocy. Here’s a funny example.
END_OF_DOCUMENT_TOKEN_TO_BE_REPLACED

Cafe Baghdadi is a little hole in the wall restaurant in Colaba, Mumbai, just around the corner from Regal Theatre and next to the famous street restaurant Bade Miya. Baghdadi’s fried chicken would beat KFC’s chicken any day of the week, by the way. That chicken is good. What tickles me at Baghdadi is a sign which lists a set of rules for its patrons. The list is long and fairly detailed. It says, for instance, that “Customers are not allowed to argue with the waiters,” and that “Alcohol is forbidden.” The list tells you in no uncertain terms what you, the customer, are allowed to do, how you are to behave, and so on. Basically it puts you in your place and tells you who is the boss.
END_OF_DOCUMENT_TOKEN_TO_BE_REPLACED

This is a true story. The faculty member involved emailed me yesterday. Scene: an IIT professor interviewing a potential candidate for PhD in a technical subject.
END_OF_DOCUMENT_TOKEN_TO_BE_REPLACED

Wonders will never cease. Just yesterday I commented on the fact that THEY have decided to do away with discriminatory pricing for foreign nationals in India. Now I am happy to report that another of the millions of asinine rules has finally been reversed. For background, read my previous post on India’s picture-perfect bureaucracy from more than a year ago. It is about India’s anti-photography fetish. You just cannot take pictures of practically any place in India. There will be a battered sign which will forbid photography.

Last week on my flight to Hyderabad, the flight attendant announced that now it is no longer criminal to point your camera on Indian terrain and shoot. Bravo! What took these morons who make dumb policies so long to realize that a picture taken by an average person is not going to jeopardize national security?

So it would appear that wisdom is slowly dawning on the idiots that make policy in India. Last week I read that the powers that be have finally come to realize that it is not a good idea to rip off foreign tourists by charging foreigners more for services compared to Indian nationals. (When this discriminatory pricing scheme will be dismantled is of course anybody’s guess given the glacial pace of change in matters bureaucratic.)
END_OF_DOCUMENT_TOKEN_TO_BE_REPLACED

These days the domestic airlines have evidently been instructed by powers up on high (so to speak) to warn the passengers that aerial photography of Indian territory is prohibited. Together with the usual instruction on how to fasten a seat belt (is it possible that someone who is able to navigate through the complex process of waking up in the morning and being able to tie his or her shoelaces cannot fathom the intricacies of how to fasten a seat belt?) and what to do in case of an emergency water landing (totally unsurvivable, if one were to be honest about it), they now are required to tell you that photography is prohibited.

Who, I always wonder, makes these rules? And why? Are these rules made so as to make criminals of ordinary people who may have a camera on hand and decide to take a picture of an interesting view from the air? Who can I ask the questions that arise from this sort of mindless stupidity? One may object to that characterization and say that it is for “national security” reasons. Waittaminit, mister. People who wish to bomb the nation to smithereens don’t have to board a commercial flight to get a good digital shot of the lay of the land. There are more sources on the web for that than you can click a mouse on. Take a look at this shot of the Taj Mahal. That is a one-meter resolution satellite image. (Click and hold over the “+” sign in the image to zoom — totally fascinating.) No one with the average camera can come anywhere close. So what is the whole point in preventing an occasional innocuous picture from the air?

There is something very peculiar about this anti-picture fetish that I notice in India. A few years ago I was outside a little run-down structure at Kushinagar near Gorakhpur in UP where the Buddha died about 2500 years. The place was deserted except for three novice monks who were chanting their evening prayers. I took a picture and immediately the lone security guy walks up and shows me the beaten-up sign which said that photography was prohibited. Why? And who makes these stupid rules and laws?

Democracy has been defined as government of, by, and for the people. By that definition at least, India is definitely not a democracy because what we have in India is government by faceless bureaucrats and corrupt politicians. Nameless unidentified unaccountable unreachable people in some vast bureaucratic machinery decide what the average citizen can and cannot do. The lack of accountability is pervasive. It stretches from the lowliest municipal commissioner to the secretary of the numerous central government ministries. Citizens are powerless and cannot question the decisions of these omni-potent idiots that guide the ship of state.

There is a partial remedy, of course. Each rule or law should have a name attached to it so that one knows who the responsible idiot is for the existence of yet one more silly idea. Perhaps it would shame these people into putting some thought into the matter before making another asinine rule. But perhaps I am too optimistic in this. These people must have hides thicker than rhinos’ skins and it would not make the slightest bit of difference.