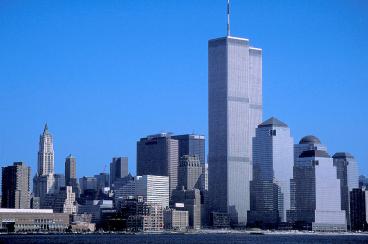 It was 21 years ago today, almost to the hour as I write this, that Islamic terrorists began their deadliest attack on the US.

I was a grad student at UC Berkeley then. I was woken around 6 AM Pacific time (9 AM Eastern) by my housemate, Wayne, talking on the phone in the next bedroom. His mother had called from the mid-West to tell him about the planes crashing into the twin towers of the World Trade Center in Manhattan. The living room TV was on. I watched the towers come down in real time.

I found this remastered footage of the planes striking the towers.

A few days later, I wrote a blog post titled “The Looking Glass War” on my blog which was called “At the Center of the Known Universe“, the predecessor to this blog.

I wrote a post on the 10th anniversary of 9/11, “Islam’s Wake up Call to America“, in which I included text of “The Looking Glass War.” Here it is again.

“Somehow it seems to fill my head with ideas—only I don’t exactly know what they are! However, somebody killed something: that’s clear at any rate,” exclaimed Alice after reading Jabberwocky in the Looking-Glass world.

It is a fair description of what the situation appears to be in the US after last week’s terrorist attacks.

Terrorism is nothing new to the US which has always prided itself as a self-styled global cop. What is different is the scale of the terrorism the US has experienced in its own backyard–indeed its living room. This seems to fill the US heads with ideas and like Alice it does not quite know what they are. What is clear at any rate is the symbolism of the chosen targets and the effectiveness of the blow that the terrorists struck.

The Twin Towers of the World Trade Center symbolized the technological and economic domination of the globe just as much as the Pentagon symbolizes the military domination of the US. Using the US civilian air transportation system to hit at these two towering symbols of American hegemony only added insult to injury.

Somebody killed something, as a confused Alice noted. And while it is still unclear who that somebody is, what was killed is amply clear.

Destroyed forever is the illusion that technological superiority gives immunity from the greater reality of the world beyond its well-guarded borders. Gone forever is the comforting dream that a nuclear missile defense shield would protect against the actions of rogue nations. The age of being able to move freely about this vast country in the most sophisticated civilian air transportation system is also over.

The symbolism of the attack on the Big Apple is unavoidable and the mind tries to make sense of the devastation and its aftermath by recalling myths and legends. The US is at war; but it is a looking glass war where the image of the villain is created by the real hero standing in front of a mirror. And like a mirror, the greater the hero, the larger the villain appears to be–only with the mirror inverting the right and wrong.

At a certain level of analysis, the US is directly responsible for the power of Bin Laden and his followers. There is an unbroken causal chain that stretches from the US through the CIA to Pakistan to the Taliban to Bin Laden. The US armed the Mujahideen and now the other half of the unholy bargain is done with the destruction of the trade center towers and a token bombing of the Pentagon.

In his quest for magical power, Dr. Faustus makes a pact with the devil in which he barters away his soul. It is a powerful tale of the dangers of hubris that compels the powerful to seek even more power and are willing to make deals with devils. Dr. Faustus squanders away many opportunities where he could have redeemed himself but didn’t. It appears that the US is all set to make a larger Faustian bargain with Pakistan. It is possible that the other half of the latest deal with the devil will be a nuclear bomb in the financial district of San Francisco a few years from now.

Fortunately  that hasn’t happened yet. But the Biden administration is doing its best to make it happen. Recently it has given a bunch of fighter planes to Pakistan. Arm the Islamic terrorists first, and then go bomb some Islamic country after a terrorist attack. The military-industrial complex works as designed.