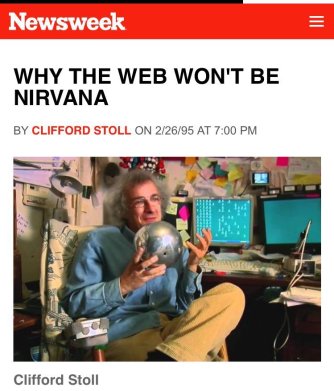 “It is difficult to make predictions, especially about the future.”[1] It’s common for most predictions not to age well. Consider the one made by one Mr Clifford Stoll exactly 27 years ago in Feb 1995. He was not bullish about the web. 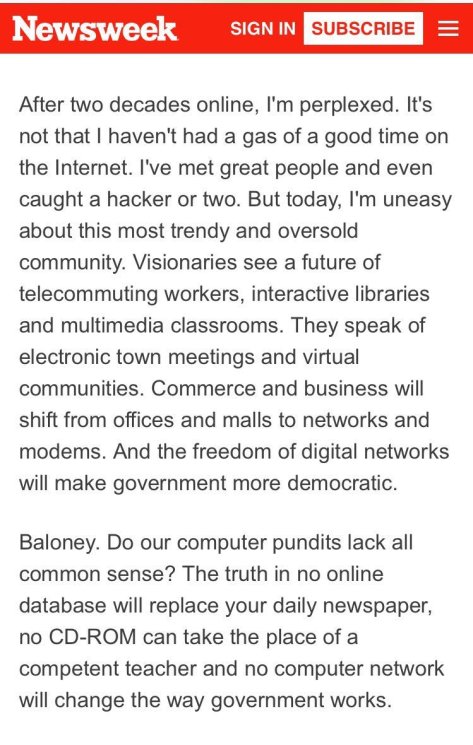 Now, you may note that he claimed in the above that at the time of writing (1995) he’d been online for two decades — meaning he’d been online since 1975. That is actually true since he was at the Lawrence Berkeley National Laboratory. He wrote an interesting book in 1989: The Cuckoo’s Egg. “It is his first-person account of the hunt for a computer hacker who broke into a computer at the Lawrence Berkeley National Laboratory (LBNL).”

Check out the wiki entry on the book (link above.) It’s makes for fascinating reading.

So he’s no dummy when it comes to the web. Still he got it quite wrong. So beware. Don’t believe everything that the experts claim about the future. Caveat lector.

Talking of LBNL, it is located on the Berkeley hills, just a bit up the road from UC Berkeley (my alma mater.) It’s where the first particle accelerator was built. The cyclotron was small enough to fit on a desktop. A direct descendant of that is the giant Large Hadron Collider which is

… the world’s largest and highest-energy particle collider. It was built by the European Organization for Nuclear Research (CERN) between 1998 and 2008 in collaboration with over 10,000 scientists and hundreds of universities and laboratories, as well as more than 100 countries. It lies in a tunnel 27 kilometers (17 mi) in circumference and as deep as 175 meters (574 ft) beneath the France–Switzerland border near Geneva.

About the LBNL, the wiki says, “The laboratory was founded on August 26, 1931, by Ernest Lawrence, as the Radiation Laboratory of the University of California, Berkeley, associated with the Physics Department. It centered physics research around his new instrument, the cyclotron, a type of particle accelerator for which he was awarded the Nobel Prize in Physics in 1939.”

J. Robert Oppenheimer was at UC Berkeley and worked at LBNL, and later went on to build the Los Alamos Labs and created the “atom bomb.” Oppenheimer, you may know, recalled Vishnu’s words spoken in the Bhagavad Gita, “Now I am become Death, the destroyer of Worlds.”

So there you have it — “Oppenheimer’s deadly toy.” Those words are from the song “Russians” by Sting. The song is somewhat relevant in the context of Putin’s adventures in the Ukraine. Listen.

“How can I save my little boy from Oppenheimer’s deadly toy?” Those words give me goosebumps. So, anyway, what’s on your mind?

[1] “It is difficult to make predictions, especially about the future.” Quote Investigator says that it’s a Danish witticism. “The saying was spoken during the parliamentary year 1937-1938, and no attribution was specified.”

10 thoughts on “AMA – the Predictions edition”