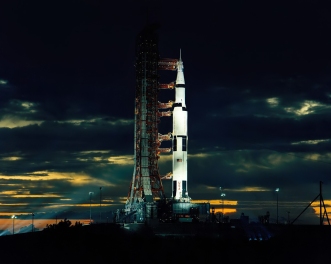 The US Apollo space program got started in May 1961 was a spectacular success in landing 12 astronauts on the moon. But it had a very rocky start when Apollo 1, which was scheduled to launch in Feb 1967 as a low Earth orbit test, never launched. A disastrous cabin fire during a ground test killed all three astronauts on the launch pad on 27th Jan 1967.

That set the program back by about 10 months but during that time, processes and procedures were put in place that ultimately resulted in the Apollo program being much more robust than it would otherwise have been. That is a prime example of how sometimes problems are portals to a better trajectory, provided that the right lessons are learned and changes made. Shocks to systems force systemic redesign and the system improves.

At the time of a disaster, it is hard to entertain the idea that it could ever be an opportunity and blessing in disguise. We humans are not given the power to look too far into the future. I am reminded of a simple story that Alan Watts used to tell which he called “the Chinese farmer” story. He told it thus:

Once upon a time there was a Chinese farmer who lost a horse. It ran away and all the neighbors came around that evening and said, “That’s too bad.”
And he said “Maybe.”

The next day the horse came back and brought seven wild horses with it. And all the neighbors came around and said, “Why that’s great, isn’t it” and he said, “Maybe.”

The next day his son was attempting to tame one of those horses. He got thrown off and broke his leg. And all the neighbors came round in the evening and said, “Well, that’s too bad, isn’t it” and farmer said “Maybe.”

The next day conscription officers came around looking for people for the army and they rejected his son because he had a broken leg. And all the neighbors came round that evening and said, “Isn’t that wonderful” and the farmer said, “Maybe.”[1]

We humans, like all living things, are embedded in all varieties of complex systems. Natural ecological systems are complex systems. They evolved over billions of years. It’s hard to fully comprehend them, and predicting their behavior is difficult. People in their ignorant hubris try to control complex system and fail.

Consider natural languages. They are the result of human action but they are not the result of conscious design. They evolve on their own and cannot be controlled in any meaningful sense.

When dictators get their hands on the economy, they end up killing millions. Mao is China and Nehru in India are shining examples of how socialism’s centralized control kills by the millions. And now it’s Modi’s turn to follow in Nehru’s (and his daughter’s) footstep.

There is an important distinction between organisms and machines. Nassim Nicholas Taleb famously noted that a cat is different from a washing machine. Random shocks (below some limit) are good for organisms but not for machines. Organisms, Taleb points out, are “anti-fragile” in that they gain from random, occasional stress. Weightlifting, for example, stresses the body beneficially.

In my view, there’s the additional distinction between machines and organisms. Machines have to be designed; they don’t magically appear through natural processes. But organisms cannot be designed; they evolve through processes whose consequences we are necessarily blind to.

Problems are not good by definition. However, the responses to problems often (but not always) lead to solutions that eventually improve the situation. The necessary conditions for  that to happen are these. First, the problem has to be properly diagnosed. That’s the “knowledge” requirement. Second, there has to be some feedback mechanism that rewards good solutions and penalizes bad solutions.

In dysfunctional systems, problems are often addressed by people who not only lack the relevant knowledge but are also shielded from the consequences of their actions.

The Silver Lining to the Chinese Virus

The Covid-19 disease is a system-wide shock to the global economy. Some may have suspected that there were major structural faults in the global economy but could not be sure. This external shock has revealed those faults. For example, it is overly optimized for efficiency and therefore lacks the redundancy that is required for resiliency.

Manufacturing around the world is too rigidly linked to China. China, is in some sense, a single point of failure. The Chinese virus has revealed that design flaw in the machine like nothing else could have. And now that that is known, the solution will definitely improve the global economy.

China has become too big for its boots too quickly. Now it will be cut down to size. I should hasten to add  that I don’t harbor any animosity towards the Chinese people. The Chinese are no better or worse than any other people. We are all flawed in our own ways.

However I detest the Chinese Communist Party and its leadership. But in this I am not singling out just the Chinese government. I detest all governments to some extent, more or less. I hold the Indian government in special contempt because I know first hand the immense damage it has done, and continues to do.

US and OECD Countries

I think the fallout of this shock to the system will be positive on balance. First, the US and other OECD countries will start de-linking their economies with China. Manufacturing will move back to the US sooner than it would have happened otherwise. Labor content in high-tech manufacturing has been on a decline, anyway. That means China was anyway losing out on its labor arbitrage advantage. The Chinese virus just hastens the inevitable shift of manufacturing to the OECD countries. I am confident of this because of my professional interests.

Next, India. I am less confident in this. The consequences of the shock to the Indian economy could be dramatically negative. That is because the people at the top have neither the knowledge to respond appropriately, nor do they stand to lose for their mistakes. Like China, India is a de facto dictatorship, a single party rule headed by a powerful clique. This clique has the power to impose rules without any due diligence or rational deliberations.

The result will be a power-grab under the excuse that it is necessary for the benefit of the people. This will lead to draconian command and control measures. Putting the entire country under lock down is just the first move. That move itself will damage the economy and lead to hundreds of thousands of deaths.

Cronies of the government will of course make out like bandits. Crony socialism has always been part of the economic system in India but this time around, it will flourish like never before. That will hurt the poor and the middle classes. A lot of bad karma is going to be visited on Indians. It’s a democracy, after all, and the bad governance they suffer is of their own choosing.

If an unprofitable firm fails, it is bad for the workers of the firm. But the failure of firms within an industry could be good for the health of the industry and for the larger economy. At the next level up, an entire industry could fail and cause misery for its workers, and yet that could be very good for the economy. (If anyone’s interested in the details, I will write a brief note on that.)

But for now, India is in big trouble.

[1] Listen to Alan Watts tell that story on Youtube.

[2] In 1782, Adam Ferguson observed that social systems were “the result of human action, but not the execution of any human design.”

Every step and every movement of the multitude, even in what are termed enlightened ages, are made with equal blindness to the future; and nations stumble upon establishments, which are indeed the result of human action, but not the execution of any human design.

9 thoughts on “The Silver Lining to the Chinese Virus – 2”