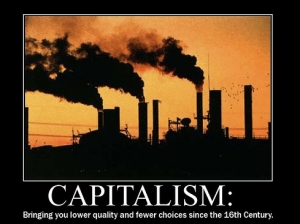 Bringing you lower quality and fewer choices since the 16th Century, reads the caption to the image of capitalism. The grim image of the evils of capitalism is captured in William Blake’s evocative phrase “the dark satanic mills.” Is it true that because capitalism rests on selfishness and greed that we don’t have a heaven on earth?

In human society in all ages the number of angels devoid of any greed and selfishness is astonishingly low. Most people are self-interested at least, if not outright selfish; and most people want more of the good stuff for themselves and their loved ones, if not outright greedy. That’s the truth about the human condition. That’s what we have to work with, and bemoaning that fact, or worse ignoring that fact, is not going to help at all. END_OF_DOCUMENT_TOKEN_TO_BE_REPLACED