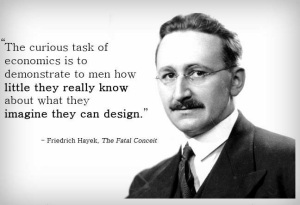 Twenty-five years ago today, on March 23 1992, Friedrich August von Hayek died. Winner of the 1974 Nobel Memorial Prize in Economic Sciences, Hayek was an Austrian / British liberal. I consider him to be not just one of the greatest economists of all times but one of the world’s most enlightened social thinkers.

Reading Hayek makes me marvel at the heights that human intellect is capable of. Compared to him, some of the most renowned economists appear to be pygmies. I feel sorry that most people — even those who claim to be economists — have not even heard of him, let alone read him. Here are a few excerpts, from Hayek and about Hayek.

… Hayek may have made his greatest contribution to the fight against socialism and totalitarianism with his best-selling 1944 book, The Road to Serfdom. In it, Hayek warned that state control of the economy was incompatible with personal and political freedom and that statism set in motion a process whereby “the worst get on top.”

Hayek lived long enough to see the rise and fall of fascism, national socialism, and Soviet communism. In the years since Hayek’s death economic freedom around the world has been increasing, and liberal values such as human rights, the rule of law, equal freedom under law, and free access to information have spread to new areas. But today liberalism is under challenge from such disparate yet symbiotic ideologies as resurgent leftism, right-wing authoritarian populism, and radical political Islamism. I am optimistic because I think that once people get a taste of freedom and prosperity, they want to keep it. The challenge for Hayekian liberals is to help people understand that freedom and prosperity depend on liberal values, the values explored and defended in his many books and articles.

Let’s stress that: freedom and prosperity depend on liberal values.

Most people cannot afford the time to do a thorough reading of the master’s works. But every person who has access to Hayek’s ideas and still neglects to understand them is guilty of willful ignorance. Fortunately, in today’s world nearly every educated person with internet access has the means to read Hayek and even watch video interviews.

For a start, you could read Hayek’s essay on “Equality, Value, and Merit” right here on this blog. Excerpts:

From the fact that people are very different it follows that, if we treat them equally, the result must be inequality in their actual position, and that the only way to place them in an equal position would be to treat them differently. Equality before the law and material equality are therefore not only different but are in conflict with each other; and we can achieve either the one or the other, but not both at the same time. The equality before the law which freedom requires leads to material inequality. Our argument will be that, though where the state must use coercion for other reasons, it should treat all people alike, the desire of making people more alike in their condition cannot be accepted in a free society as a justification for further and discriminatory coercion.

This is application of simple, pure logic. Since people are in fact, to use the delightful phrase, “differently enabled”, the only way to achieve equality of outcome is to treat them unequally. Equal treatment would result in unequal outcomes. Some are faster runners than others. To make all people equally fast in running, you would have to handicap fast runners with heavy backpacks.

Though most people regard as very natural the claim that nobody should be rewarded more than he deserves for his pain and effort, it is nevertheless based on a colossal presumption. It presumes that we are able to judge in every individual instance how well people use the different opportunities and talents given to them and how meritorious their achievements are in the light of all the circumstances which have made them possible. It presumes that some human beings are in a position to determine conclusively what a person is worth and are entitled to determine what he may achieve. It presumes, then, what the argument for liberty specifically rejects: that we can and do know all that guides a person’s action.

A society in which the position of the individuals was made to correspond to human ideas of moral merit would therefore be the exact opposite of a free society. It would be a society in which people were rewarded for duty performed instead of for success, in which every move of every individual was guided by what other people thought he ought to do, and in which the individual was thus relieved of the responsibility and the risk of decision. But if nobody’s knowledge is sufficient to guide all human action, there is also no human being who is competent to reward all efforts according to merit.

It is certain that most readers of this piece are likely to take the “TL;DR” route. It’s a pity but so be it. My duty is to point out the way. But who knows, perhaps some will take the road. That hope is all that prevents us from taking the road to serfdom. (The Road to Serfdom is Hayek’s 1944 book that advocated liberalism.)

And finally, here’s a video of the man in conversation with another hero of mine, James M Buchanan, Jr, winner of the 1986 Nobel Memorial Prize in economics. This conversation happened in 1978.