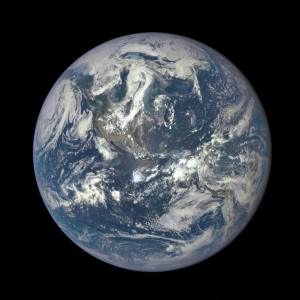 This is a picture of our earth taken by NASA’s DSCOVR – Deep Space Climate Observatory – spacecraft which is parked in the L1 Lagrange point to observe the sun and the earth.

This color image of Earth was taken by NASA’s Earth Polychromatic Imaging Camera (EPIC), a four megapixel CCD camera and telescope. The image was generated by combining three separate images to create a photographic-quality image. . . .

. . . Once the instrument begins regular data acquisition, EPIC will provide a daily series of Earth images allowing for the first time study of daily variations over the entire globe. These images, available 12 to 36 hours after they are acquired, will be posted to a dedicated web page by September 2015.

(Source: Click on the image above to get to the NASA site about EPIC pictures.)

No one on this planet had ever seen a whole picture of the Earth until 1972. 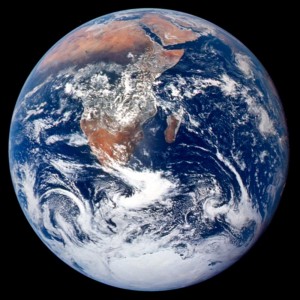 . . . the first full photo of the Earth, taken on December 7, 1972, by the American crew of the Apollo 17 spacecraft. The original Blue Marble is thought by many to be the most-reproduced image of all time.

What made the Blue Marble so special? Sure, it might have been the first full photo of the Earth that we took, but we’ve taken a bunch more since then. 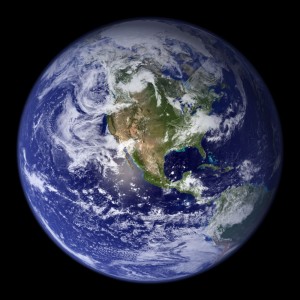 . . . it’s quite tricky to take a good photo of the entire Earth.

The first challenge is that our planet is big. The only way to view all of it at once is to get much farther away from the Earth than we do for many of our activities in outer space. The International Space Station, for instance, orbits at a height of just 400 kilometers, or about 249 miles away from Earth.

The second problem is a familiar one that plagues many photographers who are Earthbound: lighting. In order to view the Earth as a fully illuminated globe, a person (or camera) must be situated in front of it, with the sun directly at his or her back. Not surprisingly, it can be difficult to arrange this specific lighting scheme for a camera-set up that’s orbiting in space at speeds approaching thousands of miles per hour.

Go read the Scott Kelly piece. But of course the best meditation on a picture of the earth from deep space is Carl Sagan’s “The Pale Blue Dot.” Even if you have read it before, watch the video and read the transcript again and marvel at Sagan’s lyrical genius.

BONUS link: Everything you wanted to know about Lagrange points but were never neatly explained to you.

One thought on “EPIC pictures of the Earth”