My friend Veer shared this advertisement from 1947. 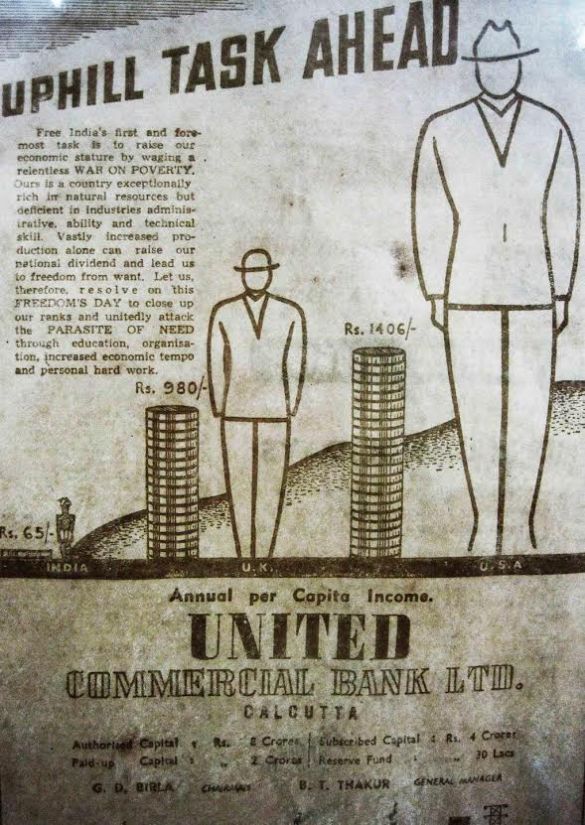 After 68 years, Indians are still fighting a war on poverty and it is still an “Uphill Task Ahead.” Very little has changed since 1947 in the economic environment, and what little change there has been regressive. Certainly relative to 1947, Indians have progressed but relative to others, India has slipped further behind.

Note that in the advertisement, the attitude is one of collectivization, that we have to mount a war on poverty by “closing ranks” and “unitedly attack”. That sets the stage for a top-down, command-and-control regime.

A country of free people should not resemble an army. Soldiers inhabit a hierarchical structure where orders flow from the top and they have no freedom in choosing whether or not to obey. That’s an obvious operational difference between an army and a society of free citizens. But there is a more salient functional difference too.

The basic function of a society is the production and consumption of wealth; the basic function of an army is not the production of goods and services but rather to resist foreign forces. By organizing or even conceptualizing a society as an army invariably leads to loss of civic freedom, and inspires fear and suspicion of all things not domestic. This distinction can be illustrated by examining the two Koreas. North Korea most closely resembles an army. Its citizens lead a Hobbesian existence — “solitary, poor, nasty, brutish and short”. South Koreans enjoy greater freedom and a materially rich life as a consequence of that freedom.

For India to prosper, Indians must somehow become free of the command-and-control regime that India inherited from its colonial masters, and Nehruvian socialism continued uninterrupted. The politicians who do the commanding and controlling of course have no incentive to grant freedom to Indians. Most tragically, though, Indians are not even aware that they are not free. They are still irredeemably committed to the task of fighting a war against poverty.

It is all karma, neh?