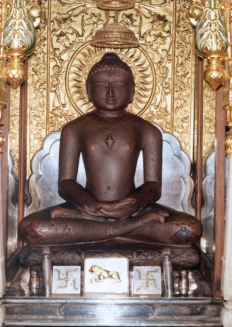 Bhagavan Mahavir, the last of the 24 Jain Tirthankaras, was born in 599 BCE in the kingdom of Vajji (somewhere in present-day Bihar.) Much of the biographical details of his life are, of course, disputed by various scholars but they are not really important. What’s important are his teachings.

Their are parallels in their lives. Like the Buddha, Mahavir was born and raised in a royal family, renounced his family and wealth when he was around 30 years old, and went in search of truth and spiritual awakening. He became an ascetic, gave up all his possessions (including clothing) and meditated under a tree. He even lived in Rajagriha for many years, the same place that the Buddha lived in for a while. Rajagriha appears to have been a special place. It was also the birthplace of the the 20th Jain Tirthankara Munisuvrata.

The wiki notes that “according to traditional accounts, Mahavira achieved Kevala Jnana (omniscience, or infinite knowledge) under a Sāla tree on the bank of the River Rijubalika at age 43 after twelve years of rigorous penance.”

There is a lot of similarity between Jainism and Buddhism but they are far from identical. One major difference appears to be that Jainism has the notion of a soul but Buddhism does not. That’s significant. Be that as it may, among the Indian religions, Jainism stresses nonviolence the most.

As a Hindu and a philosophical libertarian, I naturally value the Jain and Buddhist principles of non-violence, truth, non-stealing, and non-attachment. These things were not taught to us in school but I suppose one generally learns through some osmotic process by just being around people who observe those principles. And of course, because both Jainism and Buddhism are non-theistic, they are specially important to me since I am not a theist.

(A dear Jain friend of mine says that I am like a Jain sadhu but with a few non-Jain habits. Perhaps in a previous life I was one, or perhaps I will be one in a future life. Who knows. ☺)

India’s greatest achievements, in my opinion, has been spiritual and philosophical. India has produced great spiritual teachers like no other place. Seekers from all over the world for the last couple millennia have learned from their gifts. There was something in the land that produced such enlightened beings.

I have a theory why that happened.

For now, I wish you all have a wonderful Bhagavan Mahavir Jayanti. May all beings be happy.