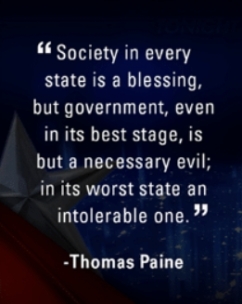 Even though I know precious little about the formation of mass psychology, I am certain that how the citizens of a nation collectively view the world must have a causal relationship with the fortunes of a nation.

As individuals we are singularly powerless to alter the environment we grow up in. We have to take that as a given, outside our control, exogenous. How we view the world is not of our choosing. Our mental models are formed largely unconsciously, and shaped contingently. It is an enormous intellectual challenge for us to critically examine our conditioning — and in most cases plain old-fashioned brainwashing by state institutions  — and change our perception of the world.

This line of thinking is motivated by an email that my colleague Rajesh Jain received, and forwarded to me. I include the full text of the email and my response, for the record.

One of my friends had forwarded your video about DHAN VAPASI campaign. I watched your video and also gone through your website https://www.dhanvapasi.com

To put it straight, I strongly believe that this very concept of “DHAN VAPASI” is a stupid idea which does not make any sense. Demanding 1 lakh money per family per year does not make any difference but to make people lazy and irresponsible ones.

Instead, a serious campaign for demanding the government to provide FREE EDUCATION, FREE HEALTH CARE, and EMPLOYMENT GUARANTEE (may not be government jobs, but any kind of work for a living) for everyone irrespective of their social & economic position. There must be no private educational institutions, but the government must provide quality education for everyone so as the Health Care. Then comes the employment.

Demanding money from the government every year is nothing but making people lazy and this very idea itself is mindless and practically impossible. I am sorry for being a little rude with my words but I spoke my mind. Please forgive me if I have offended you.

Thanks
(Name and address redacted)

I will go into the merits of Dhan Vapasi sometime else. For now, I focus on the writer’s view of what of the government is, and its proper function. Sadly for India, it’s a commonly held view. Therefore it is deserving of a proper name. I call it the “Mai-Baap Sarkar disorder”, or MBSD for short.

The MBSD is rooted in an infant’s view of the world. In this immature, infantile conception, the government is the infant’s parents personified. The infant is totally dependent on its parents for everything: the parents feed, clean, clothe, shelter, educate, medicate, heal, comfort, protect, nurture, lead, direct, and correct the infant. The parents provide love, affection, hope, inspiration, and are for the infant the fount of all wisdom and knowledge. The parents are all powerful, omniscient and perfectly benevolent, unselfish, and comprehensively self-sacrificing. And what does the child give to its parents in return? Not much is demanded. Just undying love, eternal loyalty and unquestioned devotion because the infant has nothing else to give to an all-powerful entity.

Indians would recognize that phrase. It’s from the 1911 poem by Robindronath Thakur (aka Rabindranath Tagore) which became the national anthem of India in January 1950 by the Constituent Assembly of India. The poem was titled “Bharoto Bhagyo Bidhata” (that’s how we Bengalis pronounce bharat bhagya vidhata) which in English means “dispenser of the destiny of India.” Here the dispenser is the supreme god or the Para Brahma.[1]

It’s a slippery slope from there on. From an abstraction called the Para Brahma, to a nation called Bharat (the proper non-English name of India), to the government of India, and on to the various real persons who constitute the government, and finally to the particular person who is the prime minister, So many Indians are happy to give up their independence to regress into nappy-wearing, whining, crying, helpless, ignorant, irresponsible, infants entirely dependent on the government for everything from cradle to the crematorium.

In the present case, it is Prime Minister Narendra Damodar Modi who personifies the Bharat bhagya vidhata. He’s not alone. All politicians delight in those ritual paternalistic roles. MK Gandhi (the racist, ignorant, sex-craved, anti-Hindu) was called bapu, meaning father; his blue-eyed boy Jawaharlal Nehru was cha-cha, meaning uncle. Then there is didi and dada. It’s sickening.

It is comforting to view this arrangement in familial terms but it is just historical feudalism dressed up in the rather transparent garb of democracy. In that old system, the lord-serf relationship was a stable and more honest arrangement — the lord as the master and the serfs were his servants. In our present system, the government agents are the lords and the citizens are the serfs or vassals who are entirely dependent on the lords. In return for their obedience, the citizens are granted gifts by the lords. The dishonesty lies in pretending that the citizens are not actually serfs that they so evidewntly and willingly are.

Rajesh’s correspondent is one such willing serf serving his overlord master. He expects that his lord will provide “free” stuff for him in exchange for his loyalty. Well, here’s the sad fact that he’s got to contend with.

There is a lot of free stuff in this material world of ours. But not everything is free. The stuff that nature provides unbidden is free. There’s the sun, and it provides electromagnetic radiation for free. No one has to do anything to get that sunlight. That’s why it is free: it requires no effort. The wind that the solar energy drives is free; the water that rains down from clouds (the hydrologic cycle driven by solar energy) is free.

Everything that nature provides without any human effort is free; everything else is not.

Rain water is free but the water that comes out of your bathroom or kitchen faucet is not free. The electricity that come out of the socket in your home is not free. The food that you get in the grocery store is not free. They — and practically everything else — requires human effort. That’s not free. Someone has to expend effort to make it happen.

Rajesh’s correspondent has a weird conception of the world. The first weirdness is that government is a god who magically produces stuff that it can distribute to whomever it favors without any associated costs. Where he gets that notion is not clear but that he does have that idea is very clear. He vehemently asserts that the government should provide “FREE EDUCATION, FREE HEALTH CARE, and EMPLOYMENT GUARANTEE”.  That should implies a can. That’s the trouble. The government cannot provide anything for free, no matter how many capital letters you use in your email.

The sad or unfortunate fact of the world we live in is that there ain’t no such thing as a free lunch. That’s TANSTAAFL, as Robert Heinlein and Milton Friedman repeatedly insisted upon. There are only two options: either you or someone else has to pay for any lunch you have. If you have a free lunch, then it means that you had a lunch that you did not pay for — and someone paid for a lunch that he didn’t have. There are no exceptions to that rule.

Let’s repeat that. When you get X for free (X can be anything — education, food, health care, the PM Modi’s jetting around the world, whatever), it means that someone paid for X but got nothing for his payment. It’s free for you but not for everyone.

But hang on for a second. The government is not god. The people in government — however much they would like to pretend to be — are not Para Brahma. Even Mr Modi with all his vociferous insistence that every problem can be solved by his fine speeches cannot do that.

The government cannot give Anil anything without first taking it away from Sunil. And it takes it away from Sunil by the threat of violence. It says to Sunil, “If you resist my taking what I want from you, I will kill you.”

Most of the time Sunil complies. He is willing to surrender his material possessions to the robber who gives him the simple deal “your money or your life.”

Having said that, I would say to him, “Please forgive me if I have offended you”, quoting the last line of his email to Rajesh.

There’s something about the world we live in that we cannot escape our karma. The way we think, we act. And the way we act determines what we enjoy or suffer. When our thoughts are wrong, our actions are wrong; and then we suffer the consequences. If we think that we are entitled to free stuff from the government, we set in motion processes that ultimately destroys us because the universe exacts a price for our ignorance and idiocy.

Individually or collectively, the fact is that we cannot escape the consequences of our actions.

[1] Bramha is the creator god in Hinduism. The Indian national anthem is in praise of a Hindu god, and therefore anathema to the Abrahamics, especially the Islamic variety. They would refuse to sing it if they actually understood what it connotes.

3 thoughts on “Government as the Overlord”