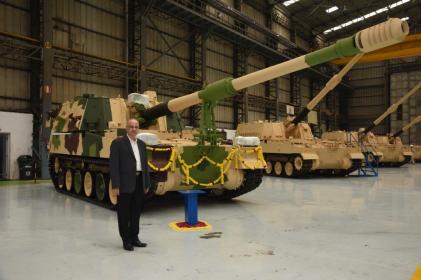 I am so thrilled to be forwarded on Whatsapp a bunch of pictures with the caption, “First Tank Delivery By L&T under “Make In India”. The message approvingly said, “Proud Moment For India.” Here are the pictures:

I always find it astonishing the love people have for the weapons of mass destruction. It is always from people whose children are not dying of starvation.

There are people whose children die of starvation and preventable diseases. Actually every day in India, around 5000 children under the age of five die of malnutrition and preventable diseases. They apparently don’t matter to those who gain from incessant wars and deadly conflict. There is a direct connection between those deaths and the celebrated tanks and jet fighters.

There should be some recognition of the needless pain and suffering. Any decent human being with any sense of morality, even a bit of human compassion and pity should feel some hesitation in celebrating the instruments of torture and death. But clearly that is missing in the people. They celebrate death as if it were a great achievement.

I can only recoil in disgust and horror at the heartless ambitions of the few (the dealers of death) and the mindless, stupid admiration of the masses who celebrate this kind of madness.

Allow me to quote myself. This is what I wrote here way back in 2004:

The poor overpopulated misgoverned third rate countries follow the simple policy of beggar-thy-neighbor and end up achieving destitution all round. India and Pakistan are prime example of this. Within India, Pakistan and Bangladesh, nearly a billion highly impoverished malnourished illiterate people scratch out a Hobbesian existence. Yet, these countries spend billions in acquiring ever more sophisticated arms from abroad. The sheer insanity of this is so incomprehensible that it is surreal. Consider this report from The Times of India of Jan 21st, 2004: Gorshkov is launch pad for nuke deal

… while India’s $1.5 billion purchase of the Gorshkov [an aircraft carrier] from Russia may seem like a big deal, the fact is it’s just a sweetener for the main course. On the anvil: a major beefing up of India’s nuclear delivery capability, with Russia likely to lease at least two nuclear submarines and several N-capable bombers to India.

I will spare you the rest of this front-page article. It is dismal reading for anyone who is even remotely aware of the hunger and deprivation of the people of this region of the world.

Can you imagine how much human suffering can be avoided by merely spending a few billion dollars in say bringing pure drinking water, schools for all children, food for the malnourished kids, contraceptive services for women, and so on …?

These are the weapons of mass destruction — these weapons destroy whether they are actually used in conflict or not. Merely buying them condemns hundreds of millions to lives of such misery that one wonders whether it would not be better for the weapons to be used so as to put an end to the misery.

Is there a way out? I think that the leaders of impoverished countries should be required to feel the pain that the poor routinely feel. I think that anyone who wishes to be a leader has to spend a month every year living the life of an average person in the bottom decile of the population. For instance, they should have no access to clean drinking water for that month, have no heating or airconditioning, no toilets, inadequate food, have to live in filth, and no medical services. Clearly these worthies lack imagination and so they should have to live the life for just one month every year that they wish to be leaders of poor overpopulated impoverished countries.

Perhaps then, maybe then, they would be not so gung-ho about buying nuclear aircraft carriers and submarines.

Go read the 2004 post “The True Weapons of Mass Destruction“.