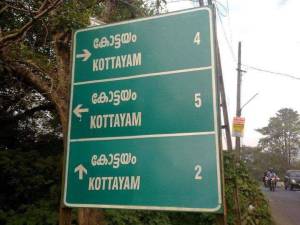 Getting around in most Indian cities is no cake walk given the awful traffic. What makes the experience worse is that quite frequently addresses are hard to locate. I was in Delhi recently and was trying to locate L-1/18 in Hauz Khas Enclave. It is never easy. I’ve been there about half a dozen times, and each time it involved a good deal of driving around because the numbering is random and unpredictable.

Why Indians have not figured out the simple street numbering system used in much of the world is a mystery to me. Another mystery is the naming of streets. Street names manifest what I call a “personality cult disorder” or PCD.

I observed that with very few exceptions, nearly all roads have stretches named after someone. Each short stretch of a road will have a different worthy named. Some intersections would have a bust or a statue of the person named, and it is invariably a politician.

Contrast this with, say, the roads in the US. They are occasionally named after some personalities (Lincoln Expressway, Martin Luther King Jr Way, etc) but mostly they are not people-centric. They will have their University Avenue, College Street, Telegraph Ave, 42nd Street, Avenue of the Americas, Vine Street, Cedar Lane, … and more recently Disc Drive, Sandisk Lane, Internet Alley, and so on. The important point is that they are not as hung up on politicians as Indians are.

You may ask, what is so terrible about the naming of roads after people. Nothing on the face of it, but it reveals a deeper dysfunction of the society. It indicates that Indians raise people on pedestals and value personalities and not institutions.  In India, they neglect institutions and that is partly responsible for the decay of the society.

But institutions are more important than people. Institutions matter because they are rule based. They are not dependent on subjective arbitrariness — the whims and fancies — of personalities. Institutions persist and outlast individuals, and therefore have longer memories. They are also less likely to be hijacked by narrow personal interests and can pursue socially beneficial objectives.

When institutions are hijacked by personalities, they decay. The Indian National Congress was not an entirely worthless institution until the Nehru-Gandhi family made it into their personal fiefdom. The transformation was unfortunate and it will continue to be a dysfunctional political party as long as it persists in elevating personalities over the institutional character of the party.

One can conjecture that it is the legacy of the Indian feudal social system that is the cause of the dysfunctional emphasis on personalities rather than on institutions. After all, the raja ruled at his pleasure and did not bother with constitutions. The serfs understood that the law was basically whatever the raja said it was. Survival in that sort of a system depended on unquestioning loyalty to a person. It still does.

A modern highly complex economic system requires the rule of law, rather than the rule of men (or women). Arbitrary decisions based on personal prejudices cannot in general lead to socially beneficial outcomes. One can imagine enlightened benevolent dictators but they are rare, and rarer still is the possibility of a long succession of benevolent dictators. The odd raja may be good personally but his successors could as well turn out to be rapacious murderers.

Sadly, rajas continue to exist in India, though they are democratically elected. They go about in cars with led lights flashing. They consider themselves above the law. They hand out or withhold favors depending on whether they personally gain from the deal. The license-permit-quota-subsidy raj is the only institution that these rajas find worthwhile.

It is a curious fact that some of these neo-rajas live in places named after previous plunderers of the land — Aurangzeb Lane, Ghaziabad, Victoria this, or King George that.

It’s high time that Indians did something to become a free people.

3 thoughts on “Personality Cult Disorder and the Naming of Roads”