One of the Founding Fathers of the United States, polymath, inventor, scientist, writer, diplomat, etc., etc., Benjamin Franklin (1706 – 1790) observed that “We are all born ignorant, but one must work hard to remain stupid.” An analogous statement about nations could be that all nations are born poor but it requires hard work to keep it in poverty. Not surprisingly that hard work is properly done by the politicians of poor countries. What’s surprising is the evident pride they appear to take in their dismal accomplishment. They obviously revel in the fact that the country is poor and proclaim it loudly for all to marvel at. A recent statement on twitter (image below) by the official spokesperson of the Ministry of External Affairs of India, retweeted over 1500 time no doubt approvingly by Indians, brought this to mind. 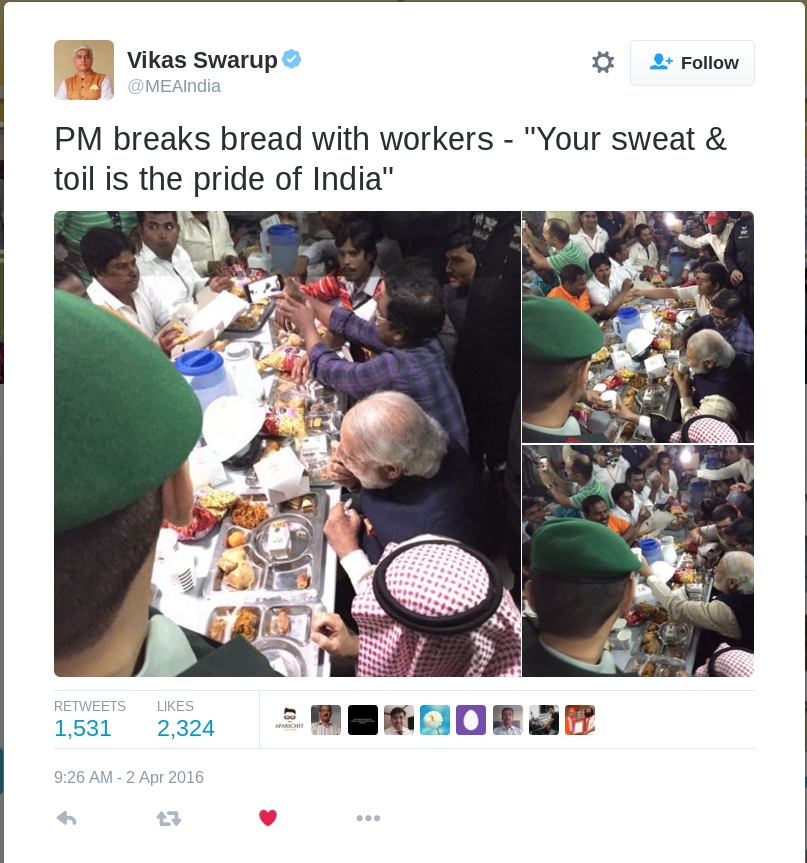 PM Modi is quoted as saying to expatriate Indian workers in Saudi Arabia that “your sweat and toil is the pride of India.” Really? The pride of India? A superficial reading of that statement suggests that he is proud of the work that expats are doing and commending them for it. I have a different perspective from that of Shri Modi’s because of my personal circumstances of being an expatriate and also because of my profession as a development economist.

Migrations always imply that subjectively and objectively some places are better than others. Most people do not migrate just for the fun of it; they are forced to do so. Leaving home is never easy and seldom undertaken frivolously. The clearest example is when people are forced to migrate en masse due to conflict. There are other reasons for migration such as famine, natural disasters, and the search for livelihood but it is always indicative of some failure in the native location. Mass migration, undertaken in search of safety or livelihood, is a matter to be pitied than to be celebrated.

The Indian migrant workers in Gulf states basically underlines the fact that the Indian economy has been a failure. Their sweating and toiling away in those inhospitable places is not just a metaphor but is literally true. They don’t sit around in air-conditioned offices busily typing on keyboards; they sweat it out in the desert heat working in construction jobs. They are abused and made to do dangerous jobs. And they die from accidents at the workplace, and many commit suicide.

Here’s an example: a graphic from the Washington Post quoted by the BBC (June 2015) about deaths related to the construction work for the scheduled 2022 World Cup in Qatar. 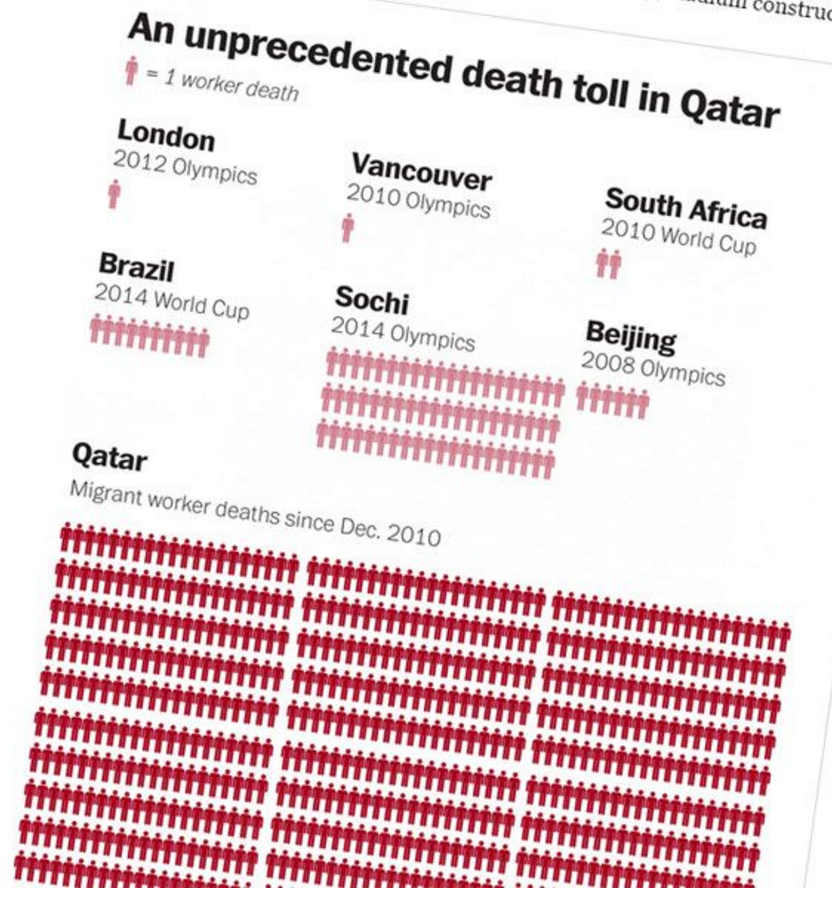 Living and working conditions for some migrants in Qatar are appalling. Long hours in the blazing heat, low pay and squalid dormitories, are a daily ordeal for thousands – and they cannot leave without an exit visa. . . .

[The numbers were] first published in 2013 in a report by the International Trades Union Confederation, called The Case Against Qatar.

The ITUC went to the embassies of Nepal and India, two countries which are the source of many of the migrant workers who go to Qatar. Those embassies had counted more than 400 deaths a year between them – a total of 1,239 deaths in the three years to the end of 2013.

Reading the report brings home the point that migrants have it tough. They are maltreated, abused and in many cases killed. Here’s more dismal statistics (“Indian worker’s body to be repatriated from Oman“. June 2015):

Bodies of over 503 Indian workers who died (killed) in Oman in 2014 were repatriated to their hometowns in India. How many bodies are hidden in the deserts, tortured for hours, and buried alive like those missing Indian workers found in Saudi Arabia in February 2014?

In the GCC countries, the “moderate” UAE tops the list with 2,513 deaths of Indians reported, Saudi Arabia comes second with 2,427, Qatar is fourth with 279 cases and Bahrain is in the last position with 175 cases.

That Indians sweat and toil abroad under inhuman conditions is not a matter of pride for India, however jingoistically it is uttered. That fact should call for some introspection and then appropriate action. But that is never ever done. Prime Minister Modi was in San Jose CA last year September. The hoopla of his public appearances then involved heavy servings of self-congratulatory “look how amazingly successful people of Indian origin are in the US and therefore how wonderful India is!” Nope.

The success of Indians abroad points to India’s failure. It is a systemic failure that denies talented, hardworking, competent people the opportunity to create wealth. Again, it should lead to critical self-examination, not unearned boastful chest thumping. Instead of bombast, Indian leaders need to ask what changes need to be done so that people — the ultimate resource — don’t choose to migrate out of India. The oh-so-successful Indian entrepreneurs abroad are a glaring indicator of the Indian dysfunctional system, and the Indian leaders’ lack of interest in figuring out the cause is a major part of the problem.

On the day of Modi’s visit to San Jose, I wrote this—

A lot of self-congratulatory speeches will be made, and the successes of NRIs in the US recounted. There is only one truth that will not be mentioned: that all these NRIs are in the US because they voted with their feet. They voted with their feet and came to the US because of what India is. This fact should actually shame Indians and its leaders. But instead they are oblivious to its implications. And it will be a cold day in hell when Indian leaders will ask themselves, these questions: “Why is it that so many hundreds of thousands of Indians vote with their feet? Why do they create wealth for themselves and for those foreign lands instead of creating wealth in India? Could it be because in India the government of India has put massive barriers to the creation of wealth?”

Dear PM Modi, when the circus is over, when the performers have done their song and dance, when the photos have been taken, when the NRIs have all patted themselves on a great event they made possible, do ponder the simple question of why are there so many NRIs? Because there is another phrase that describes these NRIs — economic refugees and economic migrants. When will India be such a place that there will be very few NRIs to welcome Indian politicians in foreign countries?
I don’t mean to rain on the parade but those questions need some attention if not a response.

I remain an NRI supporter of yours,
Atanu

Let there be no misunderstanding. Indians are like any other people. They seek a better way of life. Unfortunately, too many opportunities are denied to them and therefore those who can, move out. A small percentage (large in absolute terms) of the laboring classes go to the Gulf coast countries. Another small percentage (again significant in absolute terms) of the professionally trained class is able to move to the advanced industrialized countries. There they create wealth for themselves and naturally add wealth to the host countries. All that wealth is lost to India.

Talking of loss of wealth brings me to another class of migrants. The bottom and middle of the economic pyramid are not the only two sources of migrants. There is migration from the top layer as well. The so-called “high net worth individuals” (HNWI) also move out. See this March 2016 report Millionaire migration in 2015 (pdf) by the New World Wealth organization. It has interesting numbers. Such as that net inflow of millionaires into various cities in 2015: Sydney (4000), Melbourne (3000), Tel Aviv (2000), Dubai (2000), San Francisco (2000), etc.

Now let’s see the net outflows of HNWIs from countries.

The outflow of wealth represented by the over 4000 HNW individuals leaving India could easily be over $20 billion (assuming an average of $5 million per person). That estimate is for the year 2015 alone. Add that over the years since India’s independence, and you can easily reach over half a trillion dollars in losses. That’s a significant amount that a poor country like India can ill afford. Who or what is responsible for that loss of wealth to India?

To me, the government of India is criminally responsible for the loss to India. Government mismanagement of the economy lies at the foundation of India’s poverty. India loses wealth with every migrant — whether they end up toiling in the deserts, or working for high-tech corporations in the Silicon Valley, or moving their wealth abroad.

Shri Modi would do well to contemplate this fact when he gets some time out of congratulating NRIs abroad. The Indian government must stop working so hard at keeping India is such poverty.

2 thoughts on “A Misplaced Sense of Pride”