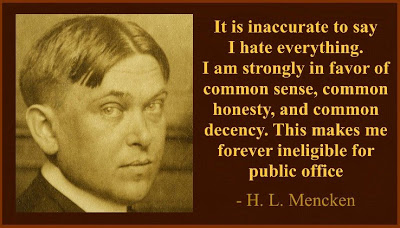 Long time since we had an open thread. This is an “Ask me anything” post. What’s on your mind?

Apropos nothing, let’s read Mencken. Mencken was insightful. For instance, he noted the “basic delusion that men may be governed and yet be free.”

He held politicians in very low regard.

When a candidate for public office faces the voters he does not face men of sense; he faces a mob of men whose chief distinguishing mark is the fact that they are quite incapable of weighing ideas, or even of comprehending any save the most elemental — men whose whole thinking is done in terms of emotion, and whose dominant emotion is dread of what they cannot understand. So confronted, the candidate must either bark with the pack or be lost… All the odds are on the man who is, intrinsically, the most devious and mediocre — the man who can most adeptly disperse the notion that his mind is a virtual vacuum. The Presidency tends, year by year, to go to such men. As democracy is perfected, the office represents, more and more closely, the inner soul of the people. We move toward a lofty ideal. On some great and glorious day the plain folks of the land will reach their heart’s desire at last, and the White House will be adorned by a downright moron.

That most people are not free is an easily observable fact. As an economist may put it, the demand for freedom is rather weak and therefore the supply is nearly non-existent.

The fact is that the average man’s love of liberty is nine-tenths imaginary, exactly like his love of sense, justice and truth. He is not actually happy when free; he is uncomfortable, a bit alarmed, and intolerably lonely. Liberty is not a thing for the great masses of men. It is the exclusive possession of a small and disreputable minority, like knowledge, courage and honor. It takes a special sort of man to understand and enjoy liberty — and he is usually an outlaw in democratic societies.

15 thoughts on “Open Thread: Ask me anything”