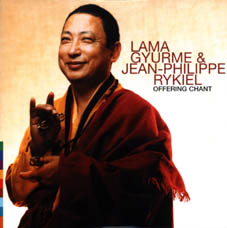 One of these days I will get around to replying to some of the comments that do need a response. Now though is time for an open thread. Say what’s on your mind.

Talking of minds, here’s a recent discovery. During my recent visit to the East coast, a friend in Philadelphia introduced me to Lama Gyurme’s Buddhist chants. Lama Gyurme is a Buddhist monk born in Bhutan in 1948.

At the age of nine, he became a permanent resident of the monastery where he received Buddhist teachings, completed by an initiation to traditional arts, including music.

At the age of 20, he followed his first spiritual retreat of three years, three months and three days, necessary to the formation of Lama, at the monastery of Sonada in India of which the director is Kalu Rinpoche. During this retreat, he was given the title of “Oumze” — master of music — by Kalu Rinpoche.

Lama Gyurme has been living in Paris since 1974. His collaborator in Paris is Jean-Philippe Rykiel. Rykiel is blind since birth (though he was not born blind.) I like his arrangements. His lightweight keyboard accompaniment is a perfect counterpoint to Gyurme’s heavy voice. The chants are of course soothing — Buddhist chants always are. But it’s more than that. To me it appears that the voice conveys a realization that is attained after years of meditation on the nature of the universe, and its defining characteristics of impermanence and change.

Here, listen to this song called “Offering Chant” from the CD “Rain of Blessings.” Close your eyes and if possible put on a set of headphones (if your audio is not being routed through a reasonable sound system.)

The words of the Offering Chant are

The words are from another YouTube video of the same song.

Here’s a brief promotional video of Rykiel and Gyurme.

Well, that’s it for now. Leave me a comment, or email me what’s on your mind.

Be well, do good work, and keep in touch.