Sorry people, I have been distracted with things — traveling places, meeting important people, thinking deep thoughts — you know the drill 🙂 So do write what’s on your mind in the comments. It’s been a while since the last open thread. Say what you will. Also, here are a few random things that I have come across recently.

Dawkins and his unholy comrade in arms Hitchens are hatching a very cunning plan to have Papa Benny arrested when he visits UK in September. Warms the cockles of my heart that they are working to bring the satanic head of the evil empire to pay for his “crimes against humanity.”

Talking about crimes against humanity closer to home, PRAJATANTRA has a post on “living in the shadow of insecurity“. Included in that post is an image of an advertisement (paid for with your tax money) which has the pictures of His Master’s Puppet and the Puppet Master. I include that picture here to add some color to this post.

The Puppet — aka Blue Turban — has made it so easy for India’s enemies that a bunch of jihadists — just 10 of them, not a nuclear bomb, not a flotilla of warships, not a huge squadron of American-gifted bombers and fighter planes, not a thousand China-gifted tanks — no, just 10 guys with backpacks — launched “an Audacious Assault on India’s Prestige and an Affront to its People.”

What has brought us to this that 10 semi-trained, crazed Islamic terrorists can launch an “audacious assault” and that too keep it up for 3 f**king days! The “Land of Gandhi”! Yes of course, the land of Gandhi, and Nehru, and the Italian Gandhi.

Pardon my cynicism, but the people deserve all this shit and more because they voted for the Congress party (and also those who tacitly allowed this party to rule by not voting at all). Karma is a bitch.

And it is all karma, neh? 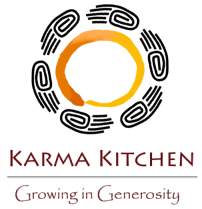 Talking of karma, here’s a restaurant that takes the idea of karma seriously — the Karma Kitchen in Berkeley.

Karma Kitchen first opened in Berkeley on March 31st 2007, by several volunteers inspired to seed the value of a “gift economy”.

Run by volunteers, our meals are cooked and served with love, and offered to the guest as a genuine gift. To complete the full circle of giving and sustain this experiment, guests make contributions in the spirit of pay-it-forward to those who will come after them. In keeping this chain going, the generosity of both guests and volunteers helps to create a future that moves from transaction to trust, from self-oriented isolation to shared commitment, and from fear of scarcity to celebration of abundance.

More food for thought, now. Gandhi was whitewashed by people who used him to further their own cause. For decades the Congress party has used Gandhi as its mascot, and so nothing unsavory was ever allowed to be published in India. Censorship in today’s age of them internets is as effective as praying for the suspension of natural laws. So Congress can do f***-all about the truth coming out — in little trickles right now and later as a flood that will drown the whole unholy edifice that the Congress party erected over the last 60 years.

“Thrill of the chaste: The truth about Gandhi’s sex life” reads the headline of an article published in The Independent of UK. Some excerpts:

Gandhi found it easy to embrace poverty. It was chastity that eluded him. So he worked out a series of complex rules which meant he could say he was chaste while still engaging in the most explicit sexual conversation, letters and behaviour.

With the zeal of the convert, within a year of his vow, he told readers of his newspaper Indian Opinion: “It is the duty of every thoughtful Indian not to marry. In case he is helpless in regard to marriage, he should abstain from sexual intercourse with his wife.”

Meanwhile, Gandhi was challenging that abstinence in his own way. He set up ashrams in which he began his first “experiments” with sex; boys and girls were to bathe and sleep together, chastely, but were punished for any sexual talk. Men and women were segregated, and Gandhi’s advice was that husbands should not be alone with their wives, and, when they felt passion, should take a cold bath.

The rules did not, however, apply to him. Sushila Nayar, the attractive sister of Gandhi’s secretary, also his personal physician, attended Gandhi from girlhood. She used to sleep and bathe with Gandhi. When challenged, he explained how he ensured decency was not offended. “While she is bathing I keep my eyes tightly shut,” he said, “I do not know … whether she bathes naked or with her underwear on. I can tell from the sound that she uses soap.” The provision of such personal services to Gandhi was a much sought-after sign of his favour and aroused jealousy among the ashram inmates.

As he grew older (and following Kasturba’s death) he was to have more women around him and would oblige women to sleep with him whom – according to his segregated ashram rules – were forbidden to sleep with their own husbands. Gandhi would have women in his bed, engaging in his “experiments” which seem to have been, from a reading of his letters, an exercise in strip-tease or other non-contact sexual activity. Much explicit material has been destroyed but tantalising remarks in Gandhi’s letters remain such as: “Vina’s sleeping with me might be called an accident. All that can be said is that she slept close to me.” One might assume, then, that getting into the spirit of the Gandhian experiment meant something more than just sleeping close to him.

It can’t, one imagines, can have helped with the “involuntary discharges” which Gandhi complained of experiencing more frequently since his return to India. He had an almost magical belief in the power of semen: “One who conserves his vital fluid acquires unfailing power,” he said.

Meanwhile, it seemed that challenging times required greater efforts of spiritual fortitude, and for that, more attractive women were required: Sushila, who in 1947 was 33, was now due to be supplanted in the bed of the 77-year-old Gandhi by a woman almost half her age. While in Bengal to see what comfort he could offer in times of inter-communal violence in the run-up to independence, Gandhi called for his 18-year-old grandniece Manu to join him – and sleep with him. “We both may be killed by the Muslims,” he told her, “and must put our purity to the ultimate test, so that we know that we are offering the purest of sacrifices, and we should now both start sleeping naked.”

Such behaviour was no part of the accepted practice of bramacharya. He, by now, described his reinvented concept of a brahmachari as: “One who never has any lustful intention, who, by constant attendance upon God, has become proof against conscious or unconscious emissions, who is capable of lying naked with naked women, however beautiful, without being in any manner whatsoever sexually excited … who is making daily and steady progress towards God and whose every act is done in pursuance of that end and no other.” That is, he could do whatever he wished, so long as there was no apparent “lustful intention”. He had effectively redefined the concept of chastity to fit his personal practices. [Emphasis added.]

I don’t care who sleeps with whom. It’s hypocrisy that I cannot tolerate. It’s the “do as I say, not as I do” that rankles. It’s Gandhi’s holier-than-thou image gets my goat. I am eagerly looking forward to the day when the carefully crafted oh-so-pure images of Nehru, Mrs Indira Gandhi, Mr Rajiv Gandhi, Mr Rahul Gandhi and other assorted members of the whole sordid family is finally revealed to be as fake as a three-dollar bill. It won’t be long.

30 thoughts on “Open Thread — Say what you will”